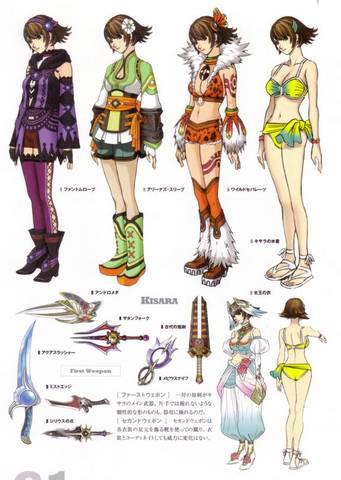 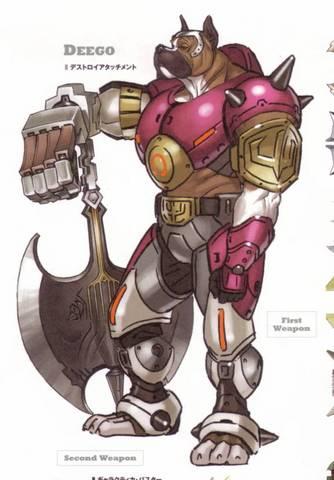 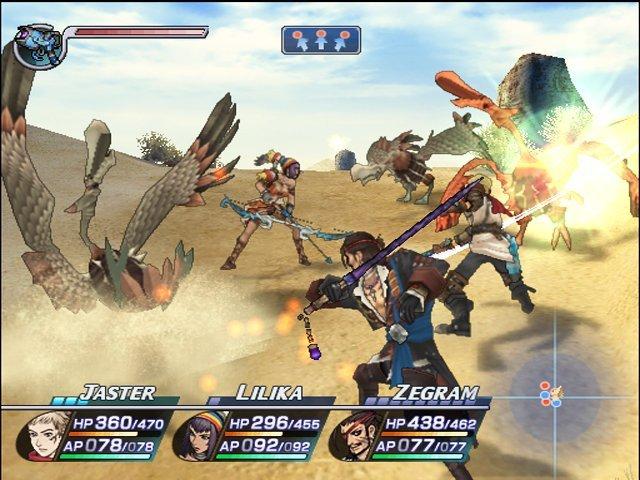 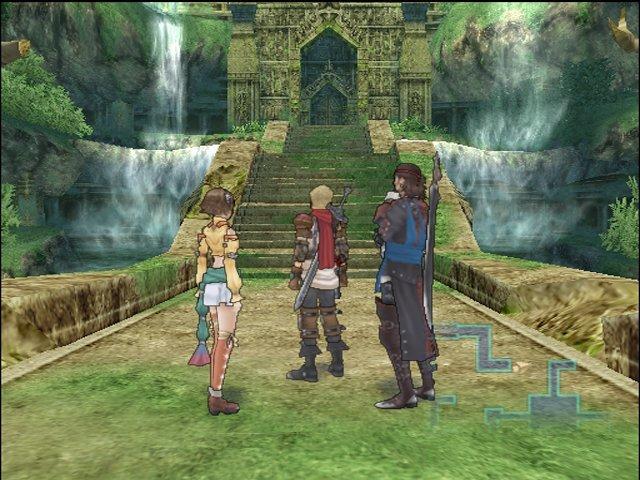 Rogue Galaxy is the story of Jaster Rogue, an orphan that landed in the hands of a priest on a desert world under military control. It doesn't take long for him to realize his destiny as a space pirate, and soon he is living his dream of interplanetary adventure.

Kisala, daughter of the pirate ship Dorgengoa's captain (who's name just happens to be Dorgengoa too!).

Steve, a robot built by the greatest scientist in the galaxy.

Simon, a disfigured human that looks like a dwarfed robot. Think Darth Vadar with half the height.

Zegram, a shady pirate that does his own thing, very suspicious indeed!

After some interplanetary adventures the pirates stumble across three more allies.

Lilika, a warrior from a tropical forest tribe on a planet completely covered in various plant/wildlife.

Deego, a gigantic bulldog looking creature (this RPG's "Big Guy") from a mining planet. His past military experience makes him a great ally (So does the huge friggin' axe).

Last and least, Jupis. The most annoying character in a sci-fi story since Jar-Jar Binks. He is some type of scientist that's on the run from the law.

The player gets three characters in their party at one time. Later in the game you can pick any of the previously listed characters as your ferocious fighting team. You can control any of them by pressing in the left thumbstick and selecting a character. It's only possible to directly control one character at a time, the other party members have to be set to a specific auto-fight preset.

The battle system is random encounter with a hack 'n slash type fighting system once you're in a battle. Each character has two weapons to use, a primary and a secondary. The primary is usually a bladed weapon, meant for close combat. The secondary is usually some type of projectile, for attacking from afar.

Exploring is pretty basic Japanese-RPG fair. You wander around and search the nooks and crannies for treasure chests. I would say it's similar to Final Fantasy X's wandering system.

Speaking of Final Fantasy X. Rogue Galaxy almost directly takes its sphere grid to use as a skill tree for each character. You collect items and place them were they go on the "Revelation Flow Chart." Some take a single item, others can take up to eight.

Level 5 outdid themselves with the cel-shaded graphics of Rogue Galaxy. Everyone knows they are one of the best development teams to utilize cel-shading on the PS2 (Dark Cloud series and Dragon Quest 8), but this is their best efforts. I did not notice any slowdown during battle. Some environments, particularly ones with a lot of light, did show slight frame rate issues.

With that said, I feel I need to mention the annoying menu lag. It caused me to select different menus several times. I did get used to it, but it took me about 5 hours.

The CG is quite amazing as well. It really does a great job of showing off the character and world art of Rogue Galaxy. I'm glad they used CG for several of the action sequences that simply would not work rendered with the in-game graphics.

Rogue Galaxy boasts some really great voice actors that people will notice from other games and anime. From Steve Blum and Crispin Freeman to Wendee Lee and Quinton Flynn. As great as they are they were given an absolutely atrocious script to read from. I'm not sure if it was a terrible translation or a bad script in it's native language.

Learning to play the game is very easy. Rogue Galaxy slowly eases the player into it's battle system (the only part that could be considered "complicated"). There isn't much else to say about it. If you've played an RPG before you'll have no problem with this.

There is a lot of extra content in Rogue Galaxy. The Insectron Stadium, where the player can play several matches with insectrons they've captured (it's kinda like a cross between Pokemon and Battle Chess). Over 150 weapons to synthesize. An extra plant called "Alistia." As well as the longest dungeon in the game, Ghost Ship and Ghost Ship Extreme. Completing any of these extras will net you better weapons and several different costumes for Jaster and his allies.
Review Page Hits: 1 today (978 total)
mediahook