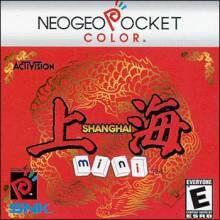 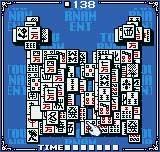 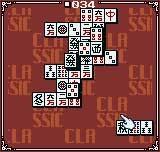 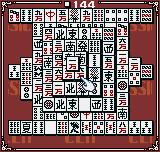 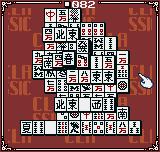 Shanghai Mini brings the classic Japanese board game Mahjongg to the Neo Geo Pocket Color. For those not familar with the game the object is to get rid of as many pairs of tiles as you can to win. The board is layed out with 5 levels of tiles with many different designs of tiles. You need to work your way down by selecting a tile on the top level and finding it's duplicate somewhere else, however you can't select a tile that is partially covered. Also, there are only a certain amount of turns you are allowed (145 to be exact) and if you're playing against an opponent there is also a time limit.

Gameplay & Conrtols
You move the hand (cursor) with the analog stick, using the A button to select a tile and B to unselect. All the options are changable right down to the layout of the tiles. One nice thing is the ability to go back one pair, and unselect, if you feel it's neccessary. There are three modes of play: Classic, Tournament and Dynasty. Classic is your typical one player mode that's more or less a practice mode. Tournament is where you advance up the Tower of Shanghai . This is kind of cool because it adds sort of a story mode to the game. You battle different challengers until you reach the top of the Tower, and there's an option to quit and continue via a password. Finally Dynasty, which is the multiplayer aspect of the game where you can play with up to three computer controlled opponents or with other human opponents using the link cable. You can select from a various amount of Power Tiles, like Scramble and 3 Pair Back, as well as set the amount of turns in which you must clear your board before your opponent clears their's.

Graphics & Sound
You shouldn't go into this game expecting much from the graphics. The game is simple and thus the graphics are also simple. The computer opponents are average and their color is ok, so nothing really stands out graphically. The one part where graphics do matter is the design of the tiles which are two toned at the most but even with a limited color scheme the designs are cool and varied. The sound is simple as well, with a catchy little tune that you'll barely notice while playing.

Surprisingly this game is a lot of fun. For a board game there is a nice choice when it comes to gameplay modes and the inclusion of multiplayer is the best aspect of this game. Overall you'll find yourself getting addicted to this game quite quickly and it's nice to be able to kick back with a game or two. I highly recommend this game for all Neo Geo Pocket Color owners.
Review Page Hits: 0 today (642 total)
mediahook