In the world of Ninja Games, this is still at the top. 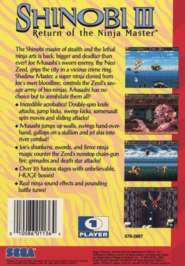 Ah, the age old classic Shinobi III for the Sega Genesis. This is the pinnacle of the Shinobi series. It is still a worthwhile game to look for and play despite how old it is. It's one of the best games the Genesis has to offer.

Some of the attacks are used for small puzzle-like situations. For example in one of the last stages, you have to jump onto falling rocks, but they are spread apart very far. Selecting and using the super jump makes it much easier to clear this level. That about sums up the gameplay. It's short, simple, and rocks. The only real breakup in the gameplay is when you get to ride on a horse and a jetboat. It's still simple to control them because you mostly just have to jump and time your attacks right. Though riding those two things are very fun and breakup just being on foot the whole game.

The soundtrack for Shinobi III is pretty good for the time. The music is still somewhat enjoyable today. The music sounds like a mixture of Japanese music with sci-fi thrown in. The songs for each stage fits in very well.

Now to the story segment. The story is pretty basic. Ninja is out for revenge on an age old enemy. It's nothing special, but the stages that you have to go through to get to your enemy are amazing. The game has some of the best stages ever to play through and they make the story a little better because they are so good. One stage has you fighting a huge mutant brain boss, while the next has you running through a forest on fire trying to make it to a huge base to battle a gigantic metal dinosaur. It's amazing stuff and to think that it was made so long ago is pretty cool.

The game isn't too difficult. You have the option of choosing very easy to very hard. So you know what your getting yourself into with what difficulty you choose. The only difference between very easy and very hard is the amount of lives you get and how big your health bar is. You still get the same amount of magic attacks in all levels. The bosses don't require more damage, either they just deal a little more damage. The only tough parts of this game are the jumping parts in the latter stages of the game. They are more frustrating and annoying than hard to tell you the truth and practicing them a few times will get you past them.

Shinobi III is one of the best action games ever on the Sega Genesis and holds a special place in my heart. It's just fun, which a lot of games these days aren't. It has a cool feel to it that most games lack as well. It's surprising that the game isn't remembered as well as other classic Genesis games because it's one of the best sleepers ever. If you find this game cheap (which you should be able to), pick it up. You will not regret it.
Review Page Hits: 0 today (157 total)
mediahook