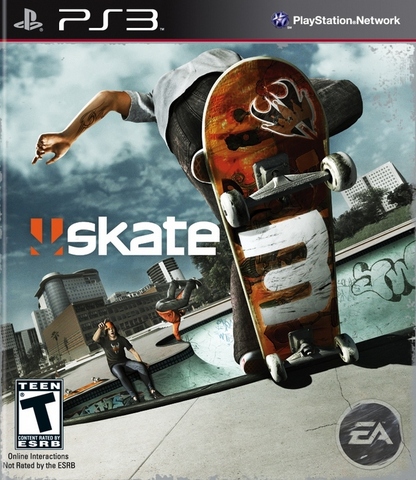 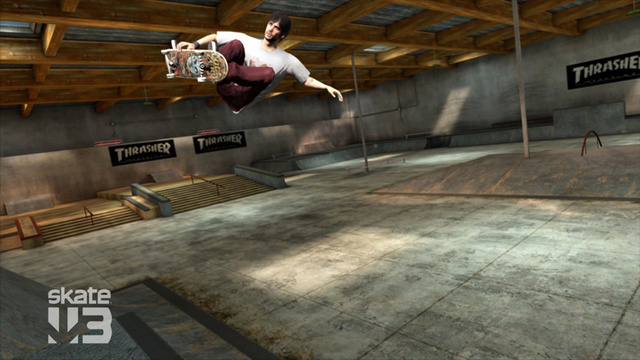 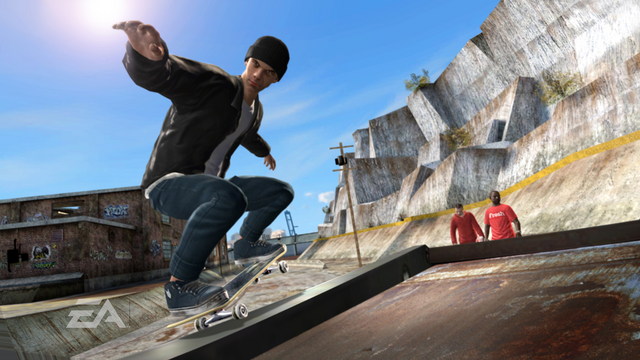 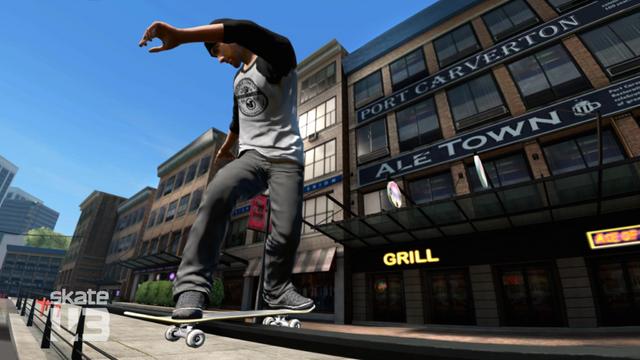 I'm going to start this off by (hopefully) saving some people time. Have you played a game in the Skate series? If the answer is both "Yes" and "I loved it," then stop reading this and go buy it. If the answer is both "No" and "I hated it," then don't buy or rent it. This game isn't any different than what you have already played so this should be a pretty easy choice to make.

Now, for the remainder of you, the ones who haven't played Skate, let's get into what this is. Skate came out 3 years ago as an answer to Tony Hawk's series, which was going down in a blaze of fire after releasing terrible sequel after terrible sequel. The game looked to separate itself from Mr. Hawk's game by being more grounded in realism and also offering a unique control setup. Unlike Tony Hawk, where you would press buttons to do flips, grabs or grinds, Skate uses the right stick for your ollie and flip trick needs. Grabs are pulled off by using either the L2 or R2 buttons. There are some more advanced moves as well but the basic gist of the control setup is to make you feel a little more involved with what's happening on screen. It works very well, for the most part, and it's probably going to be the standard going forward in whatever skateboarding games are on the horizon.

This time around, you get to skate the fictitious city of Port Carverton. The city has what you would expect. Downtown business districts, mini skate parks, a suburban area and so on. Some of the more unique areas include a shipyard and rock quarry. The city is slightly smaller than what was available in Skate 2, but I can promise you that there is plenty to do in the city, even if there is less square footage. For the most part the city is full of bright colors and full of people/traffic. Overall I found the entire area to be pretty satisfying. There were plenty of spots that I loved to go to and just skate back and forth without feeling the need to complete activities, I just wanted to skate.

If all you ever did was skate from point A to point B, however, you would be missing out on all the different objectives that are available to you. Most of the tasks should be familiar to Skate veterans. There is Own the Spot, tranny/street contests, death races, photo ops, video shoots and follow the leader type events. Some of the new events are a different Hall of Meat challenge set-up, team based events and Own the Lot events. The new Hall of Meat events are fun, even if they completely take away the realism from the game. For those who don't know, Hall of Meat is a mode where you try to bail and then hurt yourself in funny, over the top methods. The objects set before you are varied from location to location. Sometimes you have to get a certain score, you might have to hit a car with your body or you might even have to do a few cannonballs before the objective completes. I can see some people thinking this is stupid, as it has nothing to do with skating, but I found it a welcome addition and it gave me more to do. Own the Lot is really just a cluster of Own the Spot challenges (where you try to do certain tricks) and once you complete them, the lot becomes "owned". The most unique aspect of this mode is its trick lists which will give you 10 different objectives to complete in a certain amount of time. These were the events I found to be the hardest but they never got so bad that I wanted to throw stuff. The last "new" feature in the game is the team based events. These just include races and competitions that you complete with a team member instead of by yourself.

Your team is built through the game story line. You might be thinking "Wait, there's a story line in a skateboarding game?" To which I would tell you, don't worry, it doesn't get in the way. The only reason the story is there is to set up how you progress and unlock more gameplay objectives and clothes. You are a nameless skater (as always) who starts to set up a skate company. To promote your company and get more boards sold you take pictures, videos, compete in contests and so on. Each task gives you more boards sold which leads to more team members who can join you for DeathRaces and contests. Again, the story isn't important, it's really just a weak set up for the progression system of the game.

Like last time around, Black Box has put a large amount of focus on multiplayer. The same modes, for the most part, return from Skate 2 with competitive events. The addition to Skate 3 are team based modes. Just like you get a team in the single player portion of the game, you get it in multiplayer too, except with real people. The idea is nice, but I don't know if it's executed all that well. First off it's not easy to find a team that actually plays and when you do they might be ultra competitive and take all the fun out. Second off, it's just as hard to find other teams to play. I never had a problem getting into a team based multiplayer game, but sometimes the "team" we would face would be one person. Another odd thing that has been removed is any type of ranking system. In the last game you had levels to reach like any good multiplayer shooter, this time they are gone.

One last item to talk about and that is the creation elements within the game. With Skate 2 the introduction of walking off board and using an object dropper was introduced. In the latest sequel you are actually allowed to build entire skate parks, however you can imagine them. I always label myself as the not-so-creative-type but downloading a few of the top ranked skate parks revealed a lot of cool stuff. Just like ModNation Racers or LittleBigPlanet, this has the potential to add a lot of replay to the game. One idea that could take it further would be for Black Box to allow the people who create the parks to set up objectives and rewards for their parks. Maybe we get that in a future installment?

So can a game that doesn't really bring anything new to the table still be good? Yes, yes it can. If you like skateboarding games, there isn't a better series out there. There are plenty of objectives and a fun multiplayer mode as well. There is a ton of clothing and accessories to unlock to make your skater however you want. While Skate doesn't reinvent the wheel (or even improve on it, for that matter) it's still a damn good game that you will get a lot of time out of. If you are bored with Skate 2, it's time to upgrade. If you've never played the series, what are you waiting for?