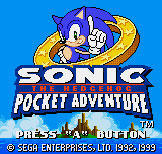 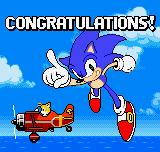 This brings me back to the good old days, before the fumbling 3D worlds. This is Sonic the Hedgehog at his best with all new updates. One of the most frustrating things about the Sega Genesis games was the fact that there was no save feature, but now there is. So that means that you can battle Eggman and still take a break whenever you want to. Yes, the story is the same, but that's not why we play Sonic games. It's the speed that gets us, and it hasn't been lost here.

Gameplay - Like I said, classic Sonic. So aside from that, Sega added a Puzzle game to the mix. The way it works is you have to collect separate puzzle pieces throughout each level to make a picture. Once all the pictures are made, well, I won't give it away. Beyond the puzzle side quest, is the traditional Time Attack mode and the new Advanced mode where you have to get a certain amount of rings in order to finish the level. But the one thing that made Sonic 2 on the Genesis great returns, head-to-head play. You can link up to another NGPC to play against each other in various modes with other characters.

Graphics - excellent, not just for a Neo Geo Pocket Color game but a 2D Sonic game in general. Everything is free flowing and the frame rate stays high when Sonic really gets moving. Obviously they aren't as good as the GBA games, but there is plenty of detail and they are better than the first two Genesis games.

Sound - It's good, but it does get repetitive. When you play you really don't notice it all that much, but it's nothing to brag about. The sound effects are really well done though.

Control - The analog stick works surprisingly well. It's responsive and precise. Both face buttons are used to jump, or charge your run when crouched, so either one can be used to the liking of the player.

After beating the game the only things left to do, if you haven't already, is to collect the Chaos Emeralds and get all the puzzle pieces. But this is a must have for any NGPC owner, and Sonic fans will flip to its faithfulness to the series.
Review Page Hits: 0 today (669 total)
mediahook