One of THE BEST Bomberman games ever! 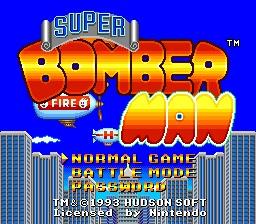 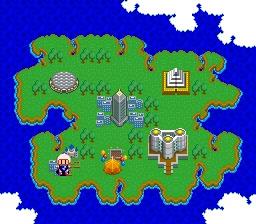 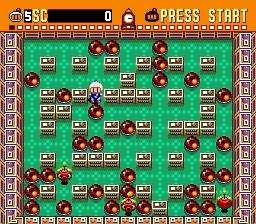 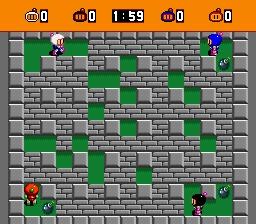 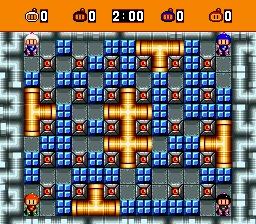 We all know Bomberman. That cute little "robot" that bombs all the enemies and is particularly famous for multiplayer gameplay. Bomberman has come a long way since his Japanese debut for the MSX in 1983, and there's a few games that are worthy to be dubbed "the crown jewel of the series." This game is one of them. This game is also noted as the first SNES game to use a special Multitap accessory for the SNES, allowing more than the usual two players to play.

Bomberman, or "Shirobon", lives in a little town called Peace Town. Just north of it is a huge city called Diamond City, where some of the best Bombers in the world compete for supremacy. The sponsor, Carat Diamond, and his goon Dr. Mook, decided to snatch Shirobon and force him to play in the games by sending a fake Bomber after him. Shirobon's old rival "Kurobon" (Black Bomber) learns of the plot and takes on the fake Bomber, only to have his rear-end kicked and his castle taken. Turning to Shirobon for help, the duo sets out to stop Carat Diamond from proceeding with his plans. A not-too-complex plot to set the game rolling.

To start, there's the Normal Game, the Battle Mode and the Passwords. In the Normal Game, the object is to eliminate the enemies and search the exit by placing bombs near bricks and enemies and blowing them up, provided you don't touch the flames or enemies or running out of time. Under the bricks are power-ups like extra bombs and fire power that help the heroes complete their objectives. At the end of every world is a boss, whom you must defeat to move to the next world. Two players can play this mode, as Shirobon is placed on the upper-left corner while Kurobon is placed on the upper-right corner. Just don't blow each other up! As for the Battle Mode, up to 4 players can duke it out by bombing each other and collecting power-ups. The rules and gimmicks might be different, but the general rules boil down to one thing: The last man standing wins! The Passwords are mainly for the Normal game that lets you pick up where you left off.

The gameplay is the same as we all know and love. Blasting enemies and watching blocks and enemies disintegrate is a lot of fun, not to mention playing with friends in Multiplayer. In addition to the Bomb, Fire, Speed, Remote, and Kick power-ups, this games marks the debut of the Punch power-ups, which lets you punch bombs a few blocks away from you, bouncing until it lands on a bombable spot.

The graphics, although not as fancy as other SNES games (mainly RPGs), really go well for the atmosphere of this game. This aspect of the game has a rare feeling that makes you think, "Yes! This truly has SNES written all over it!" Bomberman himself looks real nice, and the enemies are quite appealing. The bosses and their expressions when they get hit are also nicely done.

Those of you who played Bomberman on the Turbografx-16 may remember most of the music from this game. Despite the familiarity, this is another aspect that shines. Very atmospheric for the levels and the music department for this game made good use of the SNES's sound chip. The only annoying thing is Bomberman's walk and the SFX of placing bombs sounds like a chicken!

What's not to love about this game? The gameplay itself is enough for any Bomberman fan, and Hudson went the extra mile for sound and graphics. Only a few Bomberman games can rival this one, as this game has put the "Super" on Super Bomberman! If you're looking for a really good Bomberman game to play for yourself or friends, this one's a great choice! This game will last for a long time!