Fed up with searching JUST the Mushroom Kingdom for Peach? How about broadening your search to the Galaxies? 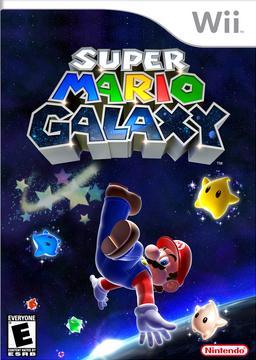 Story: Super Mario Galaxy. Its quite a simple name for such a diverse and distinctive game. You are Mario (as like most of the time), and Princess Peach gets kidnapped by Bowser (as like most of the time). In this scenario, the Princess's Castle is torn from the ground, and lifted into space by Bowser's UFO-like thing and some wooden ships (go figure). You, of course, race to Peach's help before this, and just happen to be standing on the Castle's bridge, and you (Mario) gets lifted into space as well. All is well until a Koopa Witch fires her magical shapes at you and you get blown away. You eventually end up on a planet, and have to chase rabbits down. Once caught, they turn into Lumas, and take you to "Mama" because you might be able to help. You then go to a spaceship, which will be your main hub for levels. There are "Domes" that contain levels, and once you defeat the boss at the "Star Reactor," you complete that dome, and then a new one opens up. Like in the previous Super Mario games (like 64 and Sunshine), you collect stars, and once you have the right amount of stars, you can go to the final boss.

Gameplay: The game plays like an adventure game, like the previous had. You use the Wiimote to point and collect star bits, which can be shot at enemies to stun them, or fed to certain Lumas to reach a certain goal. When you shake the Wiimote, Mario does a spin with his fists out. This can stun enemies, or could defeat them in one blow. While in the air, pressing Z on the Nunchuk allows Mario to ground pound, which is used pretty often in the game. Button C on the Nunchuk readjusts your camera, and so does the D-Pad on the Wiimote. Press A on the Wiimote to jump, and B to shoot star bits. Traditional enemies can be jumped on, like goombas and octopuses, but others may require something special, like a spin hit. The bosses are not what they should be, as in they are easy. Some are hard, but the boss in the 2nd to last Dome reactor could be the first. But, some Mini-Bosses on levels can be even harder than Star Reactor bosses. It is a little inconsistent. There are also a few new transformations Mario can do, such as Ice Mario, Flying Mario (my favorite), and Spring Mario.

Graphics: Not all that much to say, just that they are noticeably better than Sunshine, excellent particle flow, and beautiful galaxies. In one of the first levels, you have to jump on a Queen Bee to help her with her "itch." It almost makes you want to pet the bee, you see all the cute furryness, and wish it was your pet-- it was that great of graphics. I really do think [Gamespot] is not depicting Super Mario Galaxy's graphics correctly. I was in awe when I saw how they took their screenshots-- they were horrible-- like a GameCube game (not that they were horrible). So, the moral of my experience is just to see it with your own eyes.

Value: The value of this game is excellent. You will spend hours playing it, and even longer getting the stars you missed or couldn't find the first time around. It is also more fun than the previous games-- mostly because of the Wiimote's capabilities. Not to mention, it is [obviously] worth the $50.

Audio: The songs and scores are excellent, and some are even remixed versions of your favorites (when I say remixed-- I mean remixed), and the rest are new ones. Certain instances increase the tempo of the song, during tense moments. Though, audio I have to say is not this title's strong point-- they overplay songs during bosses, and levels.

Overall: Overall, the game itself is awesome. No "real" multiplayer things to do, but it doesn't need it. It is excellent how it is. Nintendo just needs to learn that everyone loves minigames...but anyways-- This is one of the best (if not the best) game currently on Wii. You will never see an equivalent on the Xbox 360 or PS3, because you will never escape that Mario is Mario, and can't be substituted for by a cheap impersonation (I'm not saying the Xbox 360 or PS3 don't have good adventure games, but they will never have a Mario). You will never feel sad or ever regret buying it. You will always come back to it smiling (except on the frustrating levels). The easy, hard, and frustrating actually all add up to create one fun, out of this world, nothing-else-like-it, super-dooper, 9.8 scorer in my book--- game.

The Bottom Line: If you own a Wii, BUY IT. If you don't own a Wii, this could easily be the reason you get one this coming Holiday.
Review Page Hits: 0 today (153 total)
mediahook