An impressively unique venture into the side-scrolling platform while it lasts, but the game quickly loses its "wow" factor. 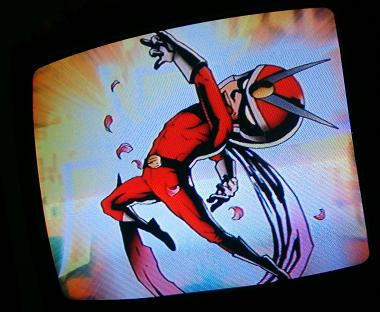 On November 12th of 2002 in Japan, Capcom unveiled what was quickly dubbed "The Fantastic Five", five GameCube-exclusive titles in development. Those titles included Product Number 03 (P.N. 03), Killer 7, Resident Evil 4, Dead Phoenix, and Viewtiful Joe, The remarkable thing about this announcement was that, of the five, only one was an addition to any previously-existing Capcom franchise, that of course being RE4. The excitement level was very high, as Capcom's "innovation" perception was beginning to wane. After all, you can only stomach so many Marvel vs. Capcom and Street Fighter Alpha reduxes before it starts becoming tiresome.

As of this moment, of those five, P.N. 03 was released and received rather poorly. Dead Phoenix was axed during development. Killer 7 and Resident Evil 4 are still in development and scheduled for release later this year or, possibly, early next year. Viewtiful Joe was received very well and has since then expanded to the PS2 market and has a sequel slated for both Gamecube and PS2.

Now, I have this nasty habit of buying a console, collecting games for it, getting bored and selling whatever the console-du-jour happens to be to buy ANOTHER console. I believe I've gone through two PS2s (and have since then sworn it off as the quality of games released has gone from Meh to meh to ...meh), three GameCubes and two Xboxes (also on my "never-again" list).

Recently, I picked up a GameCube once again and have decided to stick with it to the bitter end. Blame my parents; I was raised as a Nintendo fanboy, as the other consoles were too damned expensive. So, while browsing through EBGames's selection of Gamecube titles, I grabbed a copy of Viewtiful Joe, which had recently been marked down to $24.99 new. Time to see what all the hubbub was about.

My initial response was nothing short of breathtaking. The graphical presentation was fantastic, the fighting was intense and the gameplay was rewarding. How many side-scrollers are out that let you earn points to buy new screen-filling special moves to make your character more charismatic on screen? Ingenious at worst, I was hooked to the end.

The gist of the storyline is as follows: You're a man who likes old, crappy movies. Your girlfriend (whom you shun in lieu of the much more impressive old-school movies starring your favorite superhero, Captain Blue) is inexplicably absorbed INTO the old movie-screen during one of your dates and taken hostage by an unknown force, and you follow suit shortly and enter the Big Screen yourself. After a few minutes of bumbling through the Movie World, you meet up with your now-deceased hero, Captain Blue, as he passes the mantle onto a new generation (how touching), allowing you to transform into the fantastic, red-garbed superhero known as... well, you can't think of a cool name right now, but it'll come eventually, right? And so the legend begins anew.

The game is centralized around, once you earn it, your VFX-meter. It starts out small and pitiful, but can be expanded by collecting fifty powerups. Every fifty powerups you collect increases it one more slot and, obviously, the more slots you have, the more VFX juice you have at your disposal. The VFX meter powers your ultra-cool special moves. For instance, Joe can perform the "look, ma, I've got Bullet-time!" effect where you can avoid damage even from a direct hit or, alternatively, just look very cool bashing a dozen bad guys in slow-motion. There's also a hyper-speed power that lets you take on your enemies at Mach-4 speed, sending mirror images of yourself around the screen to damage other enemies lurking about or grab distant items.

Those two powers are not only useful for taking out thine enemies, but are also a vital part of progressing through the level. For instance, some hovering platforms might be out of your jumping distance. No problem; use your slow-down technique to halt the propellers and send the platform down to hopping distance. Now, say you need it to rise up a couple hundred feet so you can hop over a sixty-foot mountain. No problem again: use your Mach speed powerup to spin the propellers faster and harder to skyrocket you to the skies. Ingenious. There's a few more moves, some of which you have to earn, but the system itself is pretty solid.

The graphics sport 3D-modeled characters maneuvering in a remarkably unimpressive side-scrolling 2D backdrop. The graphics look dated, but I suppose that's some of the appeal. The game wouldn't be the same had it looked realistic. Play Zelda: Wind Waker for more information. At any rate, VJoe manages to pull off the old-school-meets-new-school look fairly well. The only gripe I had about the graphics was, when you run out of your leet-juice (I re-dubbed the VFX meter) and revert to Human Joe, the screen gets all fuzzy like an old, antiquated video reel. The distortion can get in the way of critical things on the screen and it's very distracting, and for the life of me, I can't figure out why they decided it was necessary. Ah well. The game's sense of style and overall "shazam" wowed me, and it wowed me hard.

However, the end came far too quickly and much too easily, and what was left was rather disappointing. Reflecting on the storyline, there wasn't really anything that jumped out and bit me. I can dismiss that due to the fact that, traditionally, fighting games have no storyline, but there you have it. Can't really use that excuse anymore, guys. Going through the game repeatedly is pretty much out the window; you already know all the tricks needed to progress through the levels and you know the plot twists.

Overall, the game was good while it lasted... I just wish it would have lasted longer.
Review Page Hits: 1 today (1,213 total)
mediahook