True to the card game, and probably the closest we'll get to a great Yu-Gi-Oh! game. 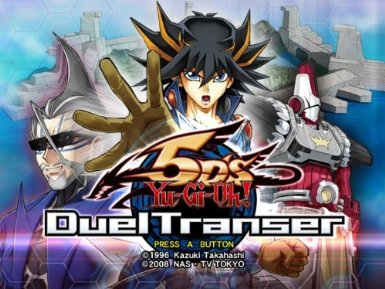 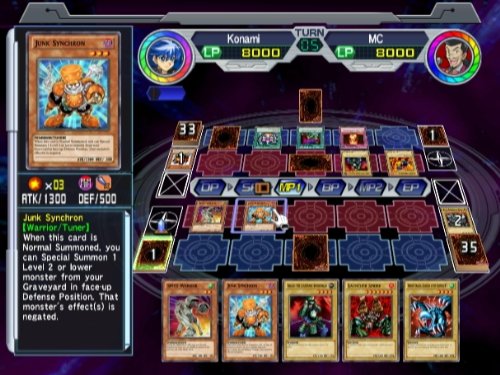 Yu-Gi-Oh!: 5D's Duel Transer is all about dueling. If you're looking for the RPG elements of the previous Gamecube release, this isn't the game for you. If you're looking to lock yourself in your bedroom for a few hours a day and trust in the cards, game on.

The control scheme utilizes only the Wii Remote (even though the nunchuk is required to be plugged in at all times) and is easy to master quickly. During Story Mode, you make your way through hexagonal grids by rolling dice, landing on spaces, dueling, and ultimately advancing to the next floor of a tower. While a slight story exists about contest duelists being possessed, it is largely irrelevant. You go around the grid, duel, and advance; simple as that. The starter deck you're given is actually pretty good (even good enough to make it through a couple of floors if you get some lucky breaks), but you'll want to build up your deck quickly. After each duel you'll earn DP (Duel Points), which you can use to buy booster packs. The booster packs are rather generous and you can have a nice attack-heavy deck within a couple of hours. It's a very lather, rinse, repeat process (battle, make deck better, battle again). However, the Duelists you encounter have many different deck themes, and you'll find yourself abandoning strategies from time to time to adapt and survive against your opponent, including just running out of cards and playing defense.

Just when you think you've completed the 70+ hour Story Mode, 15 more levels of "Valhalla" appear for those who are truly dedicated. The dueling gameplay is spot-on with the ACTUAL RULES of Yu-gi-oh!, unlike many of the Gameboy releases. But the game has no mechanism to allow you to activate traps quickly besides ask you at any possible activation time, whether or not you would like to activate a trap. This leads to you being asked four times or more, each turn, whether or not you'd like to activate a trap you've laid. It's probably the single biggest flaw of the game, but there's really no way around it that keeps the rules intact. There is no multiplayer with buddies because it would be too difficult to take turns without the other player viewing their opponent's cards. There are, at most, seven or eight sound themes in the whole game, and even those leave a lot to be desired. There are only summon animations for very rare or special monsters, such as fusion monsters or that particular duelist's ace-in-the-hole monster, but even given the Wii's limitations, the animations are beautiful.

Overall, Konami got the meat and potatoes right in this game, but didn't go that extra mile to make a completely refined product. This game is better suited for hardcore duelist fans who want to spend hours dueling with and collecting all the cards they couldn't afford when they were playing the game back in the day. Easy to find under $15, this is the must-own console game for Yu-Gi-Oh! fans.
Review Page Hits: 0 today (405 total)
mediahook