There aren't enough apes in shorts in the world, so Sony released Ape Escape 3 to meet the demand. 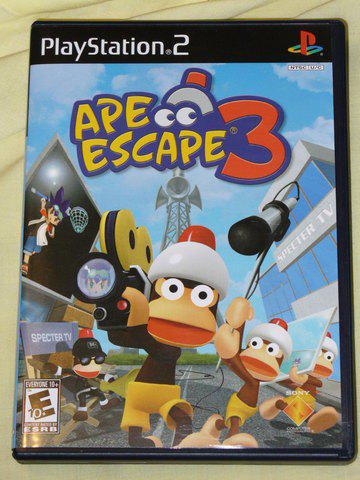 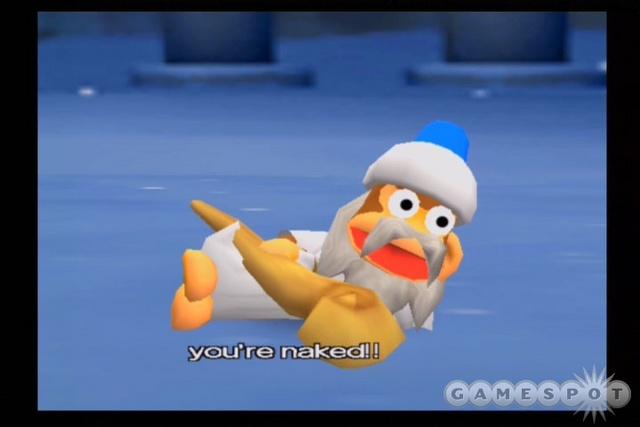 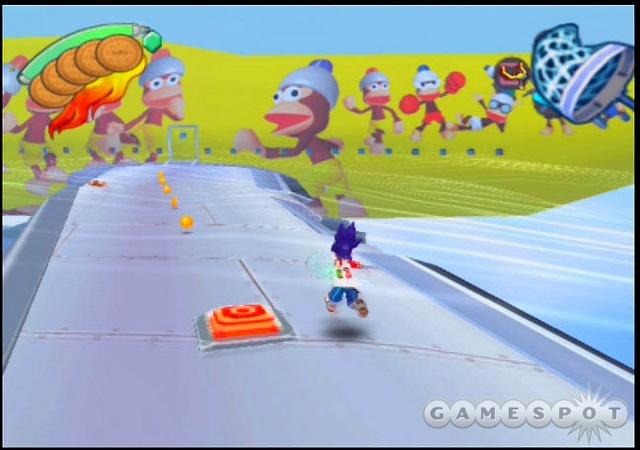 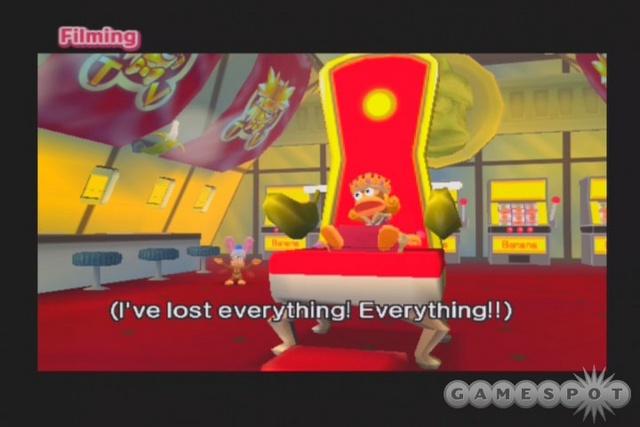 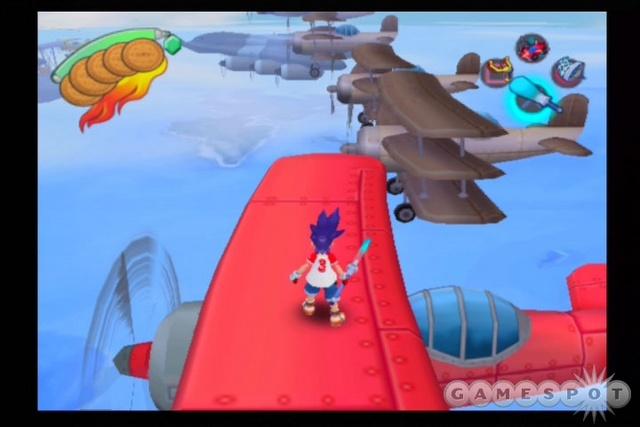 But how much demand will there be after this game?

The series' novelty wore off years ago, but netting monkeys is still a fun (if limited) experience.

Although there are better games available, such as Ratchet & Clank, Sly and Klonoa, what keeps Ape Escape 3 from the pinnacle of platform gaming is its lack of challenge. It simply isn't as satisfying to capture those damn dirty apes as it used to be. This changes its worthiness as a purchase, as it affects its replay value. Even though Ape Escape 3 is still a fun game, it just isn't as satisfying as it should be.

The story starts with Specter, the diabolical monkey genius, again taking control of Earth's television. He's broadcasting his signal all over the galaxy and planning to overrun Earth with his helmetted apes in shorts. It's your job as either Kei (boy) or Yumi (girl) to go out, bop those suckers on the head and net 'em.

There are over 400 monkeys to capture, 20 levels to complete, and tons of content to unlock in Ape Escape 3. There's a good variety of levels to play through, and the gameplay is smooth and easy to pick up, even with no previous experience with any of the games. For new players, the dual-stick control scheme isn't really complicated. Moving the character and using your weapons means moving the left and right analog sticks, with different items mapped to the PS2 controller's face buttons. Also, R2 or L2 are used to jump. For a new player, it should take around 30 minutes to become completely comfortable with the control scheme. There are mobile phones spread throughout all the levels that explain the controls well, and there's also a training room for practice with the new gadgets acquired during gameplay.

The unlockables range from a Metal Gear Solid inspired mini-game (complete with an appearance by Snake himself!) to stage theme songs and embarassing photos of the game's characters. Most of the content is entertaining and worthwhile, but some of it is lackluster or downright disappointing. The fighting game that replaces the cherished boxing game from the two previous games is a huge letdown. Also, I couldn't shake the feeling that however cool some of it might be, most of the unlockable content felt like padding, somehow making the Ape Escape 3 experience last longer. It works for a while, but it doesn't make up for the ease of the main game, nor make up for the fact that the hardest levels in Ape Escape 3 can be beaten the first time in less than 15 minutes.

Still, these levels can be really fun to romp around in. A particularly fun one is the airplane level, which in no conicidence is also one of the more platform intensive levels. Hopping from airplane to airplane is quite a thrill, even if falling off doesn't have dire consequences. Trying to catch an ape while doing this is even more fun. And all the gadgets from the previous games are here as well, and you can even select exploding rice pudding for your RC car.

The biggest addition to the gameplay is definitely the new costumes. Ranging from a wild-west kid to a future ace, all of them look and play differently, and all help you capture those apes. The wild-west kid in particular is exciting because, for the first time, you can use a projectile weapon outside of the slingshot, making catching monkeys a breeze (yet fun). The costumes also help access new areas, such as the kung-fu master hitting red buttons to swing pendulums through glass or the ninja costume making it possible to walk tightropes.

As you can tell, Ape Escape 3 has a great personality. Not only do the apes lend the game a lot of it, but also a big part of it is in the audio and visual presentation. With the sound, each level has a theme song, which ranges from enjoyable to not irritating. The best of the sound department would be the sound effects and the music that plays while in one of the game's costumes. Hearing a monkey chirp in distress is quite funny, and the sound of smacking one of them with the stun club or catching them with the net are done well. As for the costumes, there are seven that players use in the game, each with their own enjoyable theme. My favorite one is an immediate classic, the one that plays while wearing the giant ape suit. It's infectiously happy and catchy, with a whimsical style that's hard not to like. As for the voice-overs, they don't grate, but they're not exceptional either.

While the game's graphics are also filled with personality, they definitely should have been better. The stages are not humongous or overly stylized, nor are any of the characters highly detailed. The only snazzy effects in the whole game occur when Kei or Yumi use their weapons or suits. Since Ape Escape 3's graphics are not demanding, the amount of slowdown in several of the levels is inexplicable, even on the PS2, and sometimes it looks really bad. On the positive side, the game has an appealingly bright, colorful look, as well as a variety of settings for the stages. The character designs (with one big exception) are appealing as well, especially when Kei, Yumi and the apes are in their costumes.

Actually, being able to choose between a boy or a girl is an unexpected strength of Ape Escape 3. Although both characters play identically, the developers put real effort into making Kei and Yumi distinct personalities and uniquely appealing. This is most apparent when they are in the power-up suits. For example, when Kei is using the Fantasy Knight, he's decked out with a shield, helmet and full suit of armor. When Yumi's in the Fantasy Knight costume, her stun club turns into a wizard's staff and she's turned into a mage, complete with pointy hat. After one playthrough, it's interesting and entertaining to play through the same levels with the other character to see how they look smacking and nabbing apes.

And the apes are definitely entertaining. Each one has their own name, personality, costume, even their own birthday. The ape that runs around in the wolf costume is my personal favorite, but there's an ape for everyone in this game, as they run around dressed up as ship captains, french sailors, cosmonauts, vampires, knights and firemen. And hitmen. Can't forget the hitmen apes...

It isn't much of a challenge to capture most of the apes. It's a shame really, because the satisfaction of capturing them in Ape Escape was really what made it such a great game, aside from the innovative control scheme. This metered difficulty set the bar high for the series, but was lost in Ape Escape 2 and here again in Ape Escape 3. While the series still has a great personality, and all the games are likeable, it's clear that Sony is more interested in making this its "for kids" series, tailoring Ape Escape towards a more inexperienced set of gamers at the expense of the dedicated platform crowd.

For gamers who have raised expectations, Ape Escape 3 is mildly disappointing. Because the main game is so easy, real satisfaction comes only when you capture all the apes and face Specter for the last time. Even if I think it's too easy, Ape Escape 3 is still a highly recommendable rental for its specific audience. As a purchase though, ignorance might be a virtue, considering how this series has changed since the first game.