The line, between instant classic and good, is perfectly demonstrated here, shame it's leaning to the wrong side! If it weren't for the camera, control system, and failing storyline, you'd have the best game of 2008! 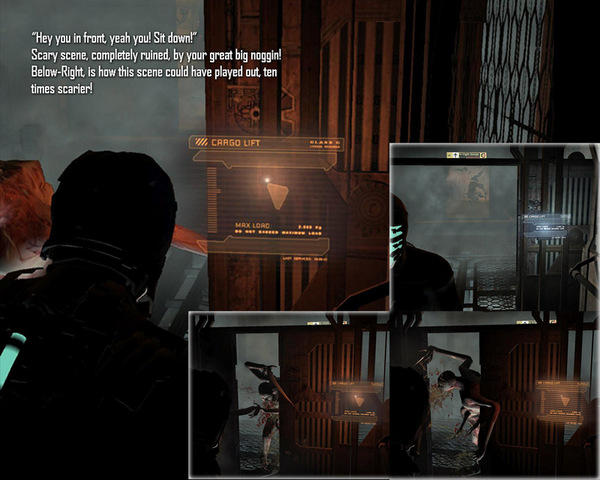 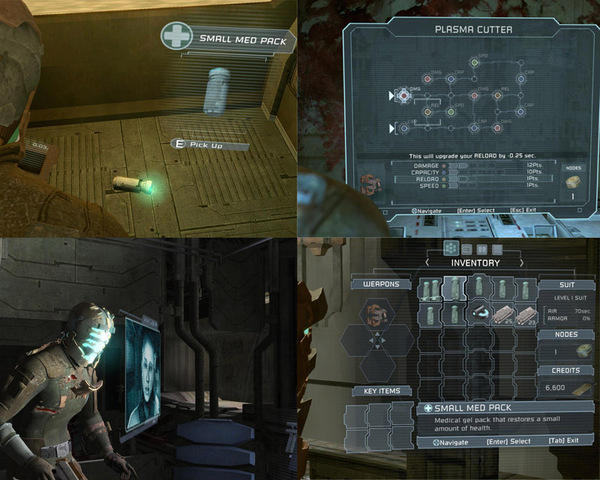 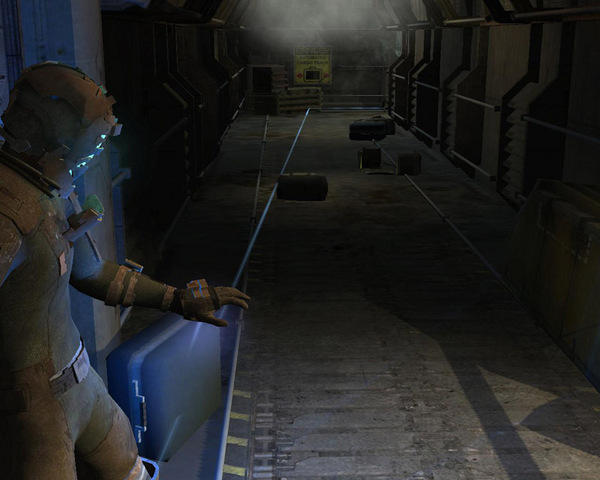 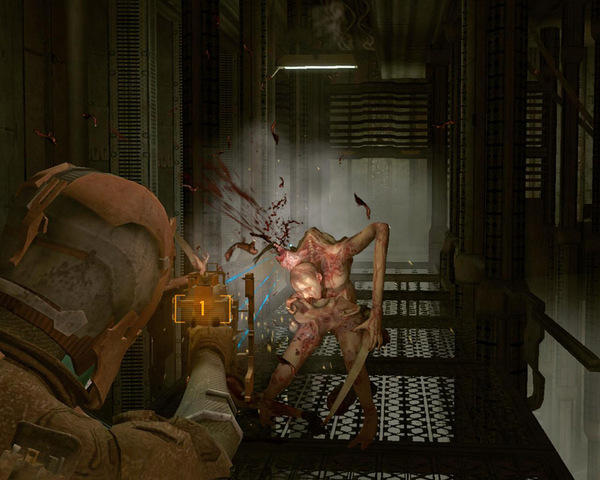 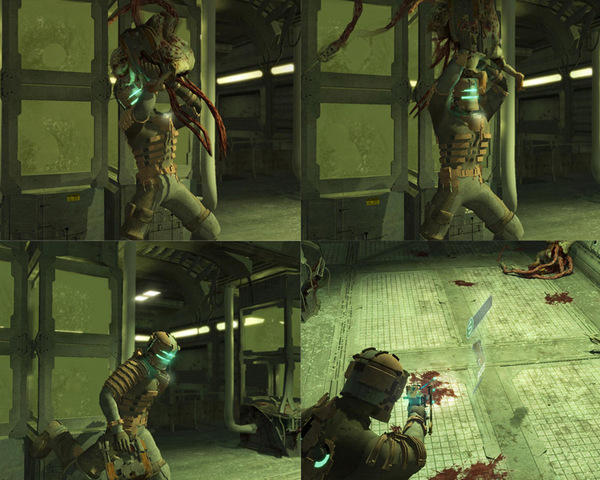 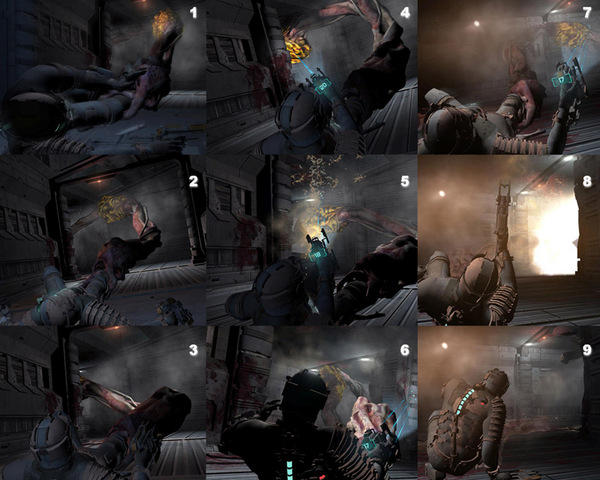 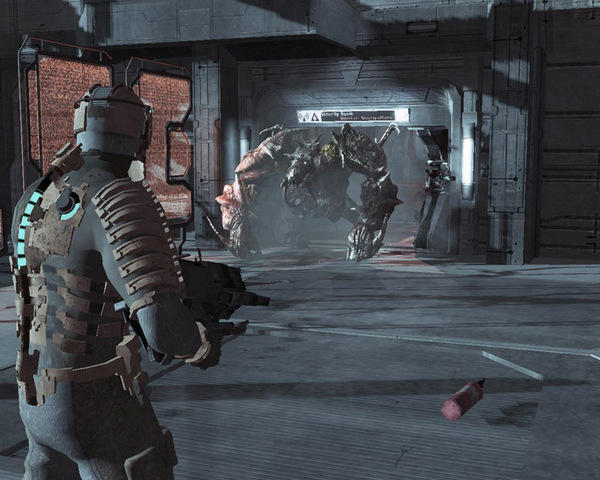 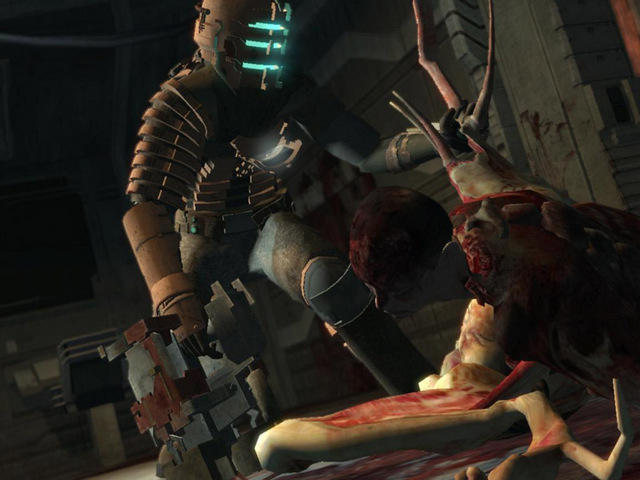 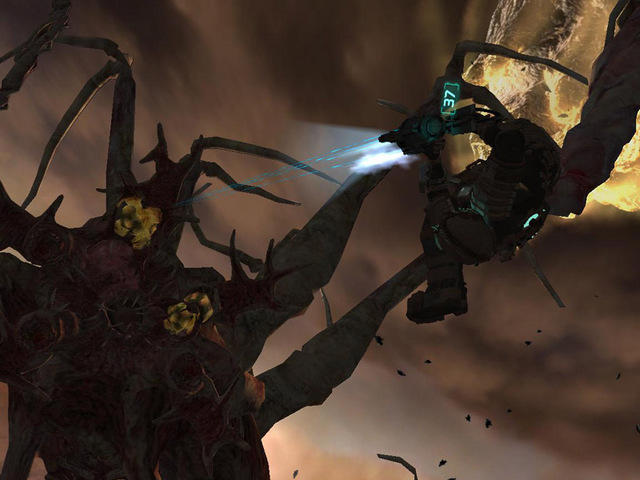 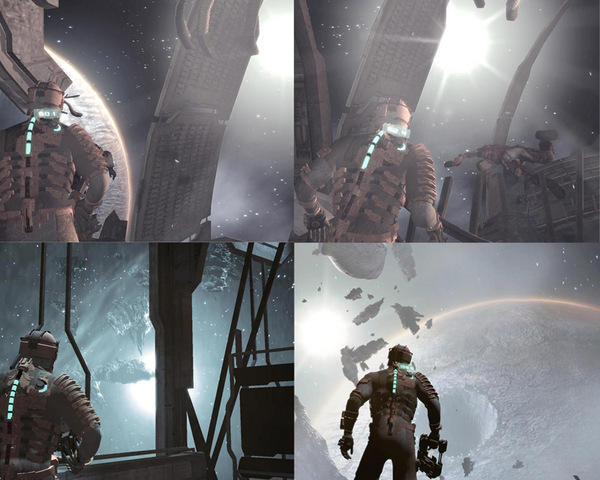 The best way to describe Dead Space would be to compare it to one of those Sci-Fi movies or games. Ones like the movie Aliens, aboard a ship and being hunted in the most horrific of ways. You play a repair man, Isaac Clarke (Yes, that's Asimov and Arthur C.), sent with a crew to a planet extractor ship, known as the planet cracker class, USG Ishimura. The Ishimura is a huge mining ship, which extracts valuable resources from planets, but for some mysterious reason is now in radio silence. It's your job to fix it, but the mere fact it's in complete radio silence should set your spider sense tingling.

But faster than you can scream, in a blood curdling manner, those immortal words uttered in every horror film since the dawn of time:
"Arrrrrgggggghhhh!"
"What was that? I thought I heard/saw something!"
"I'll be right back!"
"Let split up! We'll cover more ground!"
"Don't be silly there is no such thing as !" ( - Insert menace here.)

Dead Space uses them all within the first five minutes. While the storyline is predictable, and somewhat simple, I have to say the old tricks are the best. Walking down a dimly lit corridor, hearing the clanging of pipes, the odd grumbling noises, and the whispering voices. These play havoc with your nerves and set the mood with devastating effect. You really do feel alone, and the fight or flight instinct boils through your veins.

Sadly its effect wears off. After the 4th level it loses momentum faster than a car crash. The noises begin to fade into the background and the visual gore begins to dull. While the story ticks all the boxes, several subplots, remaining scary to the end, it just has no sparkle. It's the initial blast of stale recycled spaceship air that overwhelms your senses. After this, with no good solid story, you start to notice the other flaws.

"Swalk, does poly want a cracker?" Dead Space is a 3rd person shooter with a bit of an unorthodox view, and will divide opinions. The view is best described as poly, the parrot on the captain's shoulder. Off the shoulder, up a bit, and right a bit! It's like watching a scary movie, but peeking through your fingers because you're too scared. Fantastic, for the cinematic story telling moments, the rest of the game sees you manhandling an awkward and cumbersome view.

But then you find the cinematic moments are completely spoiled by one thing, your head. Using this view becomes a bit of a grind and spoils many other aspects of the game. This is illustrated, or not, by the very first chase scene. Where you escape in a lift from an evil monster, the final moment should be highly climatic. Only it's not, "Hey you get down in front!", as your great big spaceman helmet blocks any view at all. Making you wonder why they didn't just stick to the FPS view?

Even the weapons are somewhat average, with exception to the first, which you are given. The plasma cutter, if you were to describe it, would be considered the pistol of Dead Space. This fires a line rather than a bullet, which is helpful for cutting things in half, most notably for cutting limbs off! The rest of the weapons, just don't measure up, and more often than not, you find yourself reverting back to the pistol.

There is the standard pulse rifle and flamethrower, then the not so standard or even usual, Ripper and Force Weapon. While some are interesting they don't really work that well, as if they weren't designed as weapons in the first place. Actually a good point, that they are not all weapons; some are actually tools, in which you adapt to do damage. Perhaps that is why, none of them left any lasting impression with me.

This game tries really hard to be different, sometimes too hard. Dead Space monsters, called Necromorphs, must have their limbs separated in order to kill them. On the one hand I applaud them for being a bit different. On the other, it is a strange concept, as gamers we are fashioned to shoot at one point. Headshots! It does take a while to get the idea, and even longer before you actually start to listen. Slowly but surely you understand it's more horrifying and challenging, but yet somehow not as satisfying.

The removal of limbs is emphasized in several ways. Most disturbingly is an audio tape, this is of a man who doesn't want to become a Necromorph in the afterlife. The other more ingenious way is the big bloated monster, called "Pregnant". If you shoot him (I think?) in the stomach, little Necromorphs will burst out. But if you are clever, and take off his arms and legs, while missing the stomach, you don't have to deal with the Necromorphs inside. While it takes some getting used to, there is a definite strategy to killing these monsters.

This comes to the challenge, the Necromorphs are not hard, but what is difficult is the lack of resources. I hear the cynical "hello, part of the horror survival genre" and I would agree. Only there is a little part of me, again the cynical side, whispering that there is too much reliance on giving you the bare minimum. Again this annoyance exposes others, like the fact you have to release all buttons, in order to reload. You don't realize how annoying that is until it grates on you for 12 levels.

This is a huge shame, as there are some new and innovative things Dead Space does right. The "breadcrumbs", at times can be annoying, is a clever feature, a holographic line pointing to your next objective! Also there are plenty of Zero Gravity places, which Dead Space exploits to the most. These are clever and disorientating; also they do look fantastic and add a new level of puzzling. Then you have the Status and Kinesis module these are tools you can use to get through the levels. The status module is use to slow things down, which also can be used on Necromorphs, so you can take your time dismembering them. The Kinesis module is for moving objects.

On a system note, Dead Space is a bit of a memory hog, systems that make the minimum requirements, may find it unplayable at times. While graphically it looks the business, and there seemed to be few problems with hardware. Most troubles seem to be on the system memory side, requiring a huge amount of RAM to run. So be warned, and close down as many programs you can. Because when the screen is hectic, Dead Space does suffer a lot!

What can you say about Dead Space? I must admit, I was scared, but the experience goes downhill and it's a struggle to keep playing. The pace doesn't keep up, and there are some really disappointing aspects. The storyline feels flat and the combat system gets on your nerves. Still Dead Space tried to be different, and it's not an all out failure as there are some good quality moments. The final boss is one of the most interesting I have faced in a long time.

Also if you're interested, you might want to see the prequel animated movie, "Dead Space: Downfall". This is the story of the USG Ishimura and how it all came to be.
James

Please note that attempting to play the game using video hardware that isn't listed above may result in reduced performance, graphical issues or cause the game to not run at all.

When you run Dead Space for the first time, the game will automatically select the most appropriate options for your graphics card, CPU, and audio card. To improve performance, use the Visuals tab on the Options menu to lower settings to "Medium" or "Low".
You can also improve the performance of Dead Space by lowering the resolution the game runs at, to 1024 x 768 or 800 x 600.
Dead Space is a real-time 3D game that requires a certain amount of your computer's processing power. Other programs operating in the background can slow it down. For best results, be sure to close any background applications while playing Dead Space.
Some systems may run more smoothly in full screen mode, rather than "Windowed" mode.