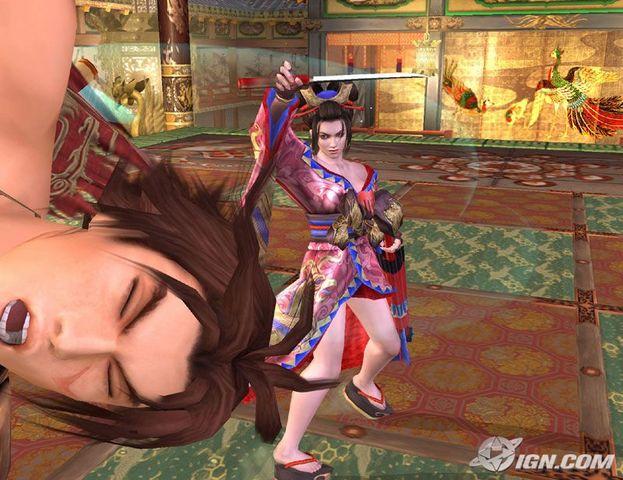 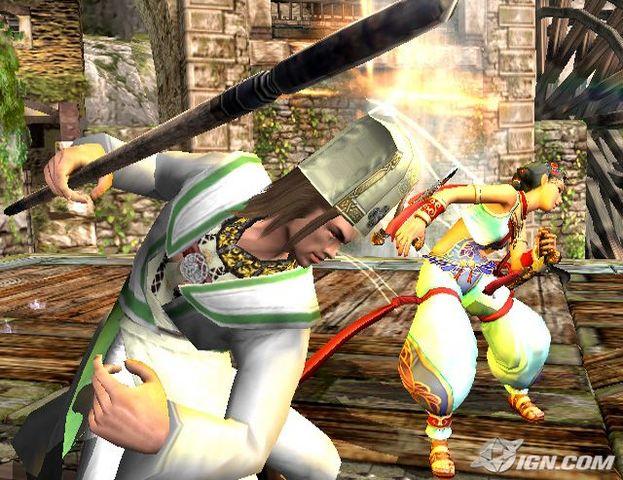 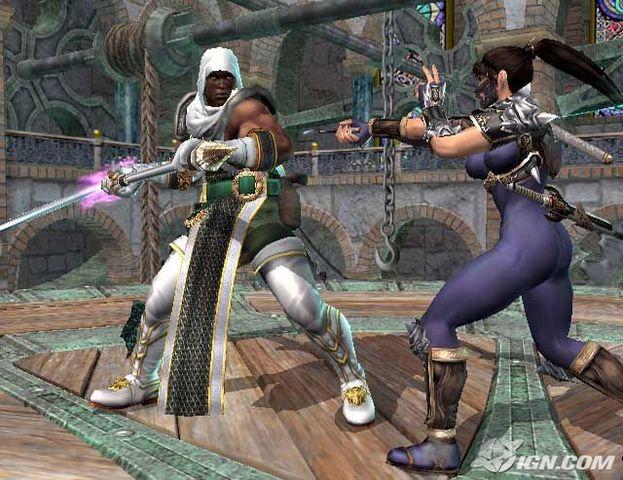 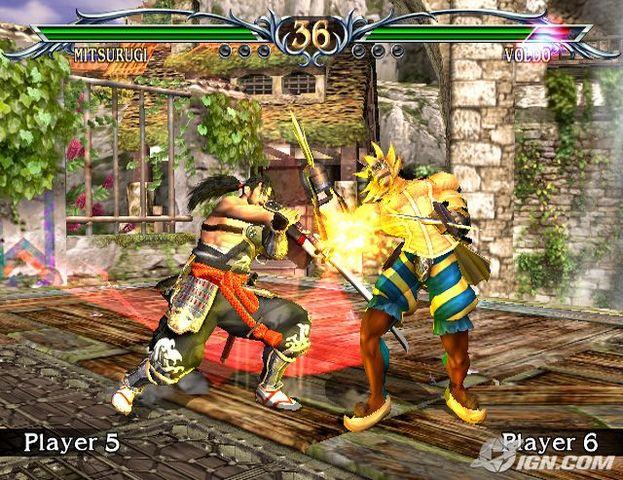 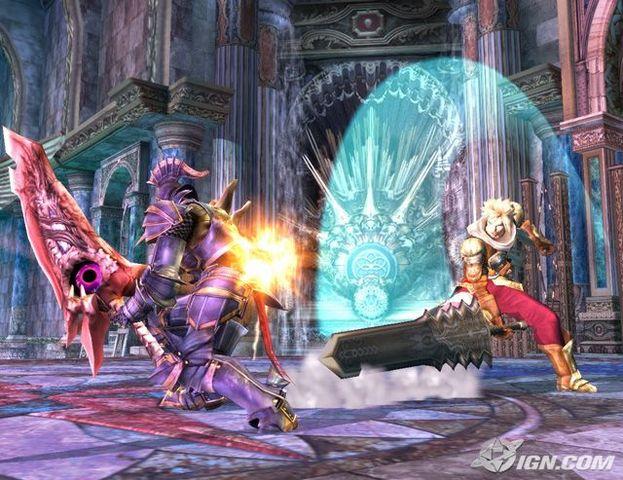 There are only a handful of fighters that can even begin to match what Soul Calibur III offers, much less do it better. Virtua Fighter 4: Evolution and Namco's own Tekken 5 are Soul Calibur III's direct competition in 3D fighters, and all three games share excellence in design: gorgeous graphics with fluid animation, fast, time-tested gameplay, and (varying degrees of success with) new gameplay features and modes that separate the new installments from previous ones. But where Tekken 5 and VF 4: Evolution both took significant steps to move their franchises forward, Soul Calibur III is content to stick to a lot of the same formula from the past two games.

Not that this is a terrible thing. Each Soul Calibur (Yes, including SC II) has been a brilliant game, with some of the best weapons-based fighting action in all of gaming. But as Soul Calibur II gave gamers a big sense of deja-vu, so does Soul Calibur III, although although not quite as much deja-vu as the previous game.

Graphics:
I like to start off most of my reviews with the best or most important aspect of a game. So, one of the things that I have really enjoyed from the two previous Soul Caliburs were those game's graphics. With Soul Calibur III though, when I first got it late last year, I was still enamored with Tekken 5. I really felt that T5 and SC III had equally impressive graphics, that T5's little details made it a match. I have since come to my senses and now realize that Soul Calibur III is absolutely one of the best looking Playstation 2 games ever.

Sure, this is a PS2 game, so it is not going to come out swinging and knock you over the head like Dead or Alive 4 does on the Xbox 360. But the graphic package for all games should be critiqued relative to the capability of the hardware they were released on, how much of that potential was realized, and also how well a game ages. This is why a 3D PSOne game like Legacy of Kain: Soul Reaver, which for its time was a good-looking game, looks horrendous nowadays whereas a PSOne game like Tomba! or Castlevania: Symphony of the Night is still pleasant to look at.

But anyway, Soul Calibur III's graphics are extraordinary not because of a pixel-for-pixel improvement over anything, but because of how all of its graphics come together: its speed, its fluid animation, the design choices for the environments and the careful attention to detail that has been given to so much of this game. The stages are an absolute marvel: the noticeable "draw-in" distance that is seen in other fighting games, and in games in general, is almost non-existent in Soul Calibur III. It is an amazing achievement.

As I was playing, I was actually looking for the "spot" where you can tell there is draw-in: that line that stands out, separating the 3D elements from the 2D background, or the un-detailed pixels of the 2D matte.

Gameplay:
It's Soul Calibur. Plain and simple. The parries are still here, all the fancy moves and the four-button layout from the previous two games. But what I have noticed in Soul Calibur III is that the game is faster than the previous two. The moves hit faster (like with Mitsirugi's upward sword-thrusts or Taki's dagger strikes) and the gameplay has been noticeably sped up.

The only characters that I have invested significant time into in SC III have been Mitsirugi and Taki, but using the new characters Setsuke, Tira and Zasalamel provide a different approach to SC. Setsuke is almost like a female Mitsirugi, in that she can continuously pound at you with guard-breaking maneuvers or others that are difficult to block because of not knowing where the moves will strike. Zasalamel is a tough nut to crack for a SC character, because his movement almost has a Tekken-like quality, in that you cannot flail about at the buttons indiscriminately or else you become stiff and open yourself to attack. Tira's a trip. She's probably the funnest new character, because her movements with her deadly hula-hoop are so fluid and run from one into the other in a way that opens up very effective combo possibilities.

So, the new characters run the spectrum of accessibility in SC III: Zasalamel is the tactician, Setsuke the female Mitsirugi, and Tira is the fun, tricky-combo chick. Also, the new "bonus" characters like the female shopkeepers and Revenant offer new move-sets for Soul Calibur veterans to monkey around with. These new characters don't seem to have the attention paid to them that the main characters have, so their effectiveness against the regulars in combat is a bit suspect.

Even though Soul Calibur is now an institution in the fighting genre, it has to be said that Soul Calibur III does not take the strides in its gameplay that Tekken 5 and Virtua Fighter 4: Evolution have taken. Sure, it can be said that Tekken 5 (and VF 4: Evolution to an extent) did not really change that much from their predecessors either. Tekken 5 in particular came on the heels of the black-sheep of the series, Tekken 4, and was excellent simply because it went back to what Tekken did best. But Tekken 5 did incorporate new elements in its formula: the new move-sets for some of the characters, the enclosed environments, integrating six new characters to the Tekken 3 mold that T5 followed.

It might not seem like a lot, but these additions to a game like Tekken 5 really made its gameplay feel a lot more fresh than Soul Calibur III's. SC III is an excellent game, but it is just below Virtua Fighter 4: Evolution and Tekken 5 on the totem pole. The reason is its gameplay does not take the evolutionary steps of improvement and refinement that most fighting fans would expect from a third installment. Depending on your expectations, Soul Calibur III could be considered a little disappointing gameplay-wise because of the lack of any significant, concrete changes or modifications to the gameplay formula. But for less-discerning fans, this is still an utterly bad-ass game.

Value:
It is hard to argue with the appeal of Soul Calibur and how much fun multiplayer matches turn out to be. Even non-fighting game fans always seem to appreciate at least the graphical display of the Soul Calibur series. And it has always been the series that has draws die-hard fans of different games (Tekken, DoA, VF, 2D Fighters, etc.) to one place that everyone can agree on. So the appeal of the fighting itself (provided players are stocked with a group of friends to play with) I cannot (and would not) call into question with Soul Calibur III.

What is a bit suspect in however are the extra modes gamers are given to fool around with in SC III. There's a brand new create-a-fighter mode (which is not without its highlights) as well as the brand new "Chronicles of the Sword" adventure mode. I have not even bothered to complete Chronicles of the Sword yet, partially because my data decided to corrupt on me, but also because it just didn't seem to be worth the time. You go around from point to point with your character over an over-world map (KINDA like Ogre Battle, but following a line), hack away at a little building, and then when the building is at 0 health, you fight a few opponents. Wheeee, such fun.

Yeah, it's as boring as it sounds, but create-a-fighter is actually kinda fun to monkey around with. The male fighters all tend to look either creepy or stupid (or both), but the female fighters generally turn out decent looking. Like I mentioned earlier, the created characters' move-sets are not as sharp as the main characters', but the fact that each class of created character has their own unique set is pretty good.

As you play through the game, you earn money and unlock new stuff that you use to customize your created fighters with. It is pretty good incentive to keep playing, but sometimes the pay off for your game time is hit or miss. Sometimes items are actually unlocked with playtime, but other times simply the opportunity to purchase the items is unlocked, which brings us to "The Shop."
"The Shop" is your headquarters for unlockable content in Soul Calibur III, run by three chicks. One of them unlocks new stuff for your created fighters, another unlocks weapons demos and new modes, and the other unlocks weapons for the main characters and created characters. The Weapons Demo shop is fairly expensive, so it will take a pretty good while to unlock all of that stuff. The biggest way to earn money is to run through the mission mode (with survival matches, time limit stuff, etc.), but doing that can take a while and become kind of a chore.

Learning Curve:
It's Soul Calibur! X is your block, triangle and square your two "punches", and O your kick. Nothing new there, but it must be said that the difficulty in this installment has been ramped up a bit from the previous games. Normal difficulty can actually be pretty frustrating in the arcade and mission modes. Just an example, the number of matches you have to win in a row in the survival mission on Normal is 30. Yes, you have to win 30 matches in a row, with an at-times inconsistent difficult progression. One match, you can be fighting Yoshimitsu and he'll just be standing there taking your punishment. But the next match, you get Lizard Man and he's just teeing off on you.

Also, the new boss character can be pretty cheap, especially when first starting out with the game. He's not as bad as Jinpachi from Tekken 5, but he kinda feels like he could be that way when you first start out in the game. I offer one piece of advice for people playing Soul Calibur III for the first time. DO NOT START OFF AS ZASALAMEL. I'm dead serious. His attack movements are stiff and will chafe against the gameplay flow of even seasoned Soul Calibur players. So, the difficulty in Soul Calibur III feels a bit unbalanced at times, and at times kinda cheap, but it isn't anything that's too difficult to overcome.

Sound:
I was surprised just how much sound this game borrowed from even the first game. I could swear that there are at least 3 or 4 tracks lifted straight from SC, but not that this is a bad thing. One of the stages uses the same music track from a pretty similar stage in SC, but it is a great effect, the sound making you think of that great game but also your eyes being treated to splendor of the environments in SC III.

The sound is nothing remarkably ground-breaking or original. It's just what you would expect from a Soul Calibur game, and it is still really, really good.

Overall:
I can heartily recommend this game to any fighting game fan. But there will be those players out there who will feel a tinge of disappointment with this latest installment. It's not a multi-platform release, and it does not take any big evolutionary steps in its gameplay that you would expect. It still is a new Soul Calibur, and it does have a lot of new content, even if some of it is hit-or-miss. But missing out on Soul Calibur III just because of a few minor flaws? That, my friend, would be pretty foolish. Don't miss this game.

The soul still burns, even if it's cooking the same ole dish.