Rockstar redefines what's possible in a videogame. With one of the best storylines ever and engaging gameplay from start to finish, Bully is one of my favorite games of 2006. 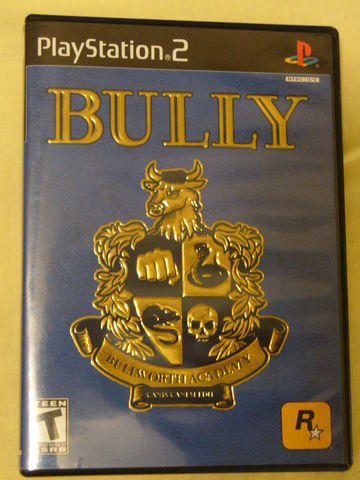 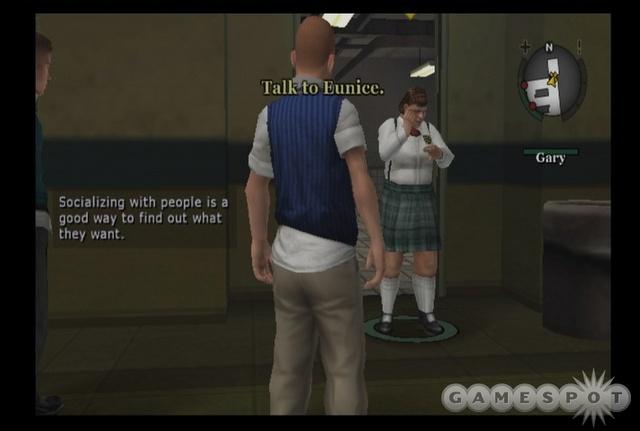 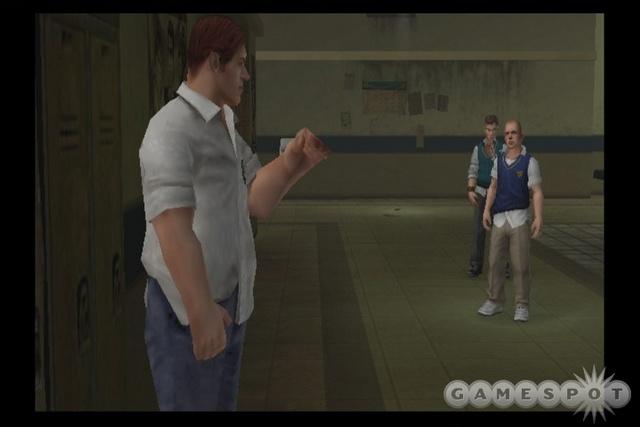 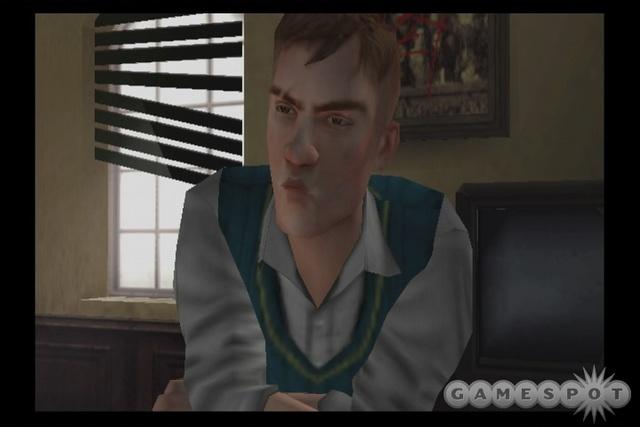 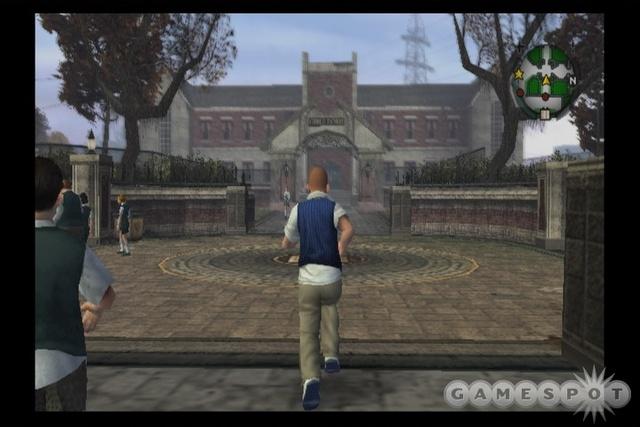 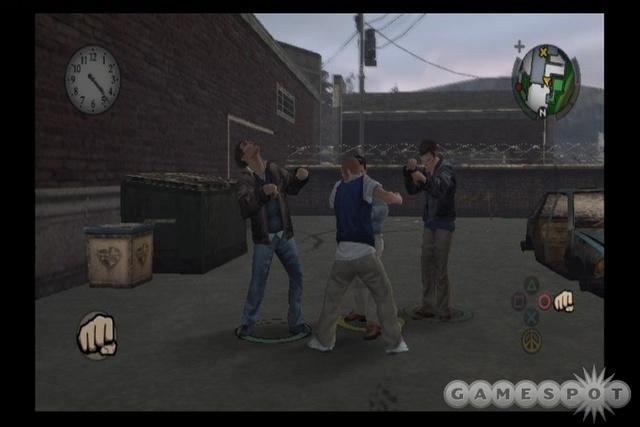 In Rockstar's Bully, the player goes back to high school, that dreaded/revered place where the last bits of childhood whimsy and idealism collide with the harsh societal parameters that stick with us for the rest of our lives. Whether it's out-of-the-loop teachers, jocks who don't think twice about giving swirlies or shoving lesser folk into lockers, or nerds who dream of dominion over the school and its peons through sheer brainpower, Bullworth Academy is full of 'em. This wonderful game emulates the ins and outs of high school life with panache and handles the social and political aspects with aplomb. This is your high school, and yet it's not: It's the one you always knew existed.

Oh, and the game is a heck of a lot of fun to play.

So, the title begs the question: is main character Jimmy Hopkins a victim or a victimizer? The answer is both. Depends on who's doing the pushing.

The opening scene sees Jimmy riding to his umpteenth school in the past two years. This time it's Bullworth, and Jimmy's "mum" decides that her and her umpteenth husband are going to catch another rich fantasy holiday that is far, far away from real-life responsibilities, like raising children. Pretty soon, Jimmy's being lectured by Bullworth Academy's mercilessly lampooned, and very clueless, headmaster about how he'll be whipped into shape like all the other would-be-Senators Jimmy will be attending class with. Soon after, Jimmy "befriends" Bullworth's resident psycho, Gary, and the "girliest" boy in the whole place, timid pink-wearing Petey.

Jimmy himself is hardly the headcase or wreckless endangerer of wholesomeness that many pegged him before Bully's release. He's simply a regular 15-year-old, one whose underlying qualities of have been ill-suited in his privileged background, until now. He's as good at maintaining beneficial relations among the game's populace as Tommy Vercetti or Carl Johnson, but in a PG-13 manner. Whether it's smooth-talking, doing favors, pulling pranks or a little schoolyard rough-housing, Jimmy gets the job done.

There are several outstanding aspects to this game, from the incredible, continually streamed music score, right down to mowing the lawn. It's a blast running errands for Bullworth's various cliques, wooing teenage girls (and even a blonde preppy guy should you choose) and, among other things, unraveling some Hitler-loving miscreant's plans to take over Bullworth for himself. Outside of its story, I could recommend Bully solely based on the number of things you get to do and how much fun they are.

The attention to detail that went into Bully's gameplay is nothing short of phenomenal. For beginners, just about anything in the environment is interactive. You can pick up a frisbee and throw it, kick a soccer ball, shoot hoops and knock over garbage cans so you can use the lid as a weapon. You can hide from the police in trash cans (and get a first-person panorama of the area by moving the right analog stick), pick fights with a hobo, use a torque wrench on your bicycle, race against others on said bicycle, and yes, play a shooting gallery mini-game at the carnival to win a humongous teddy bear for one of Bullworth's hotties. You'll also have to outrun the school prefects (hall monitors, student watchdogs) on foot, skateboard and bike when you are late for class or, in the worst case, hitting one of Bullworth's younger students.

Even going to class, while not mandatory, has great benefits, as you unlock new abilities and power-ups by successfully completing each class's set of mini-games. By completing science class, for example, your expanding arsenal of weapons (rotten eggs, potato launchers, fire crackers, etc.) becomes available at various save points, definitely better than having to go out and collect them all on your own. Most of the class mini-games are really fun and fairly challenging. The dodgeball and wrestling matches in gym class were my personal favorites, and the word puzzles in English were by far the most challenging. There is even a photography class where you go around and take photos around the Bullworth campus and, eventually, in the outlying town.

The gameplay is wonderfully varied and prankish. The story is possibly even better, as Rockstar doesn't hit a sour note anywhere, between any of the myriad personalities juggled throughout the game or in its social commentary. All the characters have personality and are likeable in their own way. Russell, the big jock, is a personal favorite of mine, because hearing him say two word sentences, like "Russell smash!," surprisingly never gets old. And that's owing to the quality of the voiceover work and the game's script. Unlike Rockstar's other games, there isn't a big name like Samuel L. Jackson, Ray Liotta or Brian Cox to be found among Bully's cast. I think that makes Bully unique and have that little extra "something" in believability.

And the script....oh my god. Some of the situations Rockstar puts these characters in, and things they have them say, are hilarious. From inbreeding among the rich folk, by making first cousins date, to the leggy art teacher falling for a hobo, Bully is funny, socially aware videogame. The humor involving the various school figures and cliques is equally full of parody and respect. The nerds are enthusiastic about the "Grottos and Goblins" card-game and will ask Jimmy to help get their cards back. The drunken English teacher is washed-up and misunderstood, saying "...and I'm only 34!" And to top it off, Jimmy embodies the American spirit when he "encourages" people's help late in the game: "Do it the American way. Buy them off, or kick their ass."

The music is the other wonderfully exceptional thing about Bully, as it is a continual stream of varied beats and harmonies that changes according to the situation. When you pick a fight with a nerd, a bouncy "She Blinded Me With Science" knock-off plays. When riding your bike, a wonderfully "american gothic" tune that wouldn't seem out of place in a Tim Burton movie comes on. And I personally like the music that plays during some of the bike races, practically goading you into taking those turns sharper and hitting that X button faster so you can win the race. So the music and voiceover work are totally original and wonderful, fully displaying Rockstar's talents at molding its own unique gameworld environment without having to resort to known commodities, a fine job indeed.

If there are any negative aspects to this game, they stand out only because of how great Bully's best aspects are. Although each character shows an impressive range of emotions effortlessly in close-up and the architecture of Bullworth and the surrounding town's buildings are impressive, the graphics are not super detailed. It also isn't the longest game ever, but at around 15-17 hours the first time through though, it's good enough. And there always seems to be more stuff to go back and unlock once you're finished the first time. And the game is worth replaying a second time, so you can count on getting at least 30 solid hours of gameplay out of this one.

For $40, Bully is an outstanding value, as it combines fantastic sound and varied gameplay with one of the best stories you'll find in any videogame. For an extra $10, the special edition of Bully is available in an oversized cardboard box that looks like a locker. It comes with a small, 16 page comic strip book and a dodgeball. Yes, a dodgeball, with the Rockstar and Bully logos on it. It's awesome.

Rockstar has done it again, except this time around the kids can buy it. Legally.

Other Information (Game Suitability and Learning Curve): This game is entirely suitable for anyone 13 years and above. There is nothing prurient or excessively violent in Bully. This game does not drop the F bomb, unlike Bruce Almighty, and the violence is not bloody or even remotely unsettling. I don't remember hearing s*** once in the game, and any cursing is of the order damn, hell, or ass. Outside of Jimmy's ability to kiss another guy, there's also nothing I found that would be offensive to anyone above the age of 13. This is a wonderful game for its ESRB age group, but will definitely hold more appeal for those who have already been through high school than for those who haven't.

Also, since I'm ASSUMING this would be the under-16 set's first experience with a Grand Theft Auto style game (which is laughable I know, but still), this game is easy to pick up and play. There are no firearms in Bully, and there also are no road vehicles to drive. Square and X are primary action buttons, for punch and jump, and item management and auto-targeting are handled with the PS2's shoulder buttons. With no previous experience with Rockstar's games, I'd say the first-time player should be accustomed to Bully's controls in less than an hour. Also, mission objectives are marked on the game's map, so you'll know where you're supposed to go at all times.
Review Page Hits: 1 today (969 total)
mediahook