lyrics to the songs 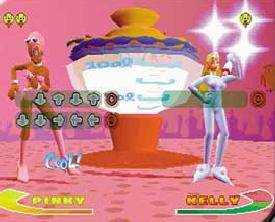 Bust-a-Groove was one of the first rhythm games for the Playstation. It came out well after Parappa but around the same time as DDR made it over seas. It was an odd game in a genre that was not yet fully hitting its stride. As a result it has become somewhat rare (at least at a reasonable price), but as a sleeper hit it's one of the top 20 or so PSX games.

Basically, the game play falls somewhere between a fighting game and a traditional rhythm game. In addition to pressing the o or x buttons on every 4th beat, each bar is accompanied by a set of direction presses you must complete before pressing either. As you complete bars, the chain becomes more difficult with more and more directions needed before the x or o button are pressed. More complication while preserving the fact that you need to finish your button presses on the 4th beat means frantic gameplay. A typical set of bars might go something like this: 1) up, o 2) up, down, x 3) right, left, up, x 4) up, down, right, left, x, etc. etc. etc. Each bar completed rewards you with points. After a while you will be given a move that allows you to "freeze" and complete a stanza of dance moves. This effectively gives you a break and time to untie your fingers.

The twist here is that instead of completing your chain you have the option (twice per level) of attacking your opponent by pressing the triangle button on the 4th beat. This will disrupt your opponent hopefully throwing them off and allowing you to get ahead. Getting ahead in this game is more than just points. The game features a dynamic camera that will rotate to focus on the player who is amassing more points (and thus more interesting to watch). Whoever ends the level with the camera focusing on them wins the match.

If you get especially rhythmic on a level you will break into super crazy moves that will essentially blow apart the dance floors on which you dance. This will also result in a special "fever time" animation at the end of the level. Some of these fever time/level destruction combos are really entertaining. The only thing is it's unlikely that if you are playing you will be able to watch it as you will be transfixed trying to keep your fingers out of a tangle.

In addition to a story mode that will allow you to unlock several additional characters, the game features a 2-player mode and a warm-up mode that works as a great tutorial. The characters themselves each feature a unique style and dance move set (frida -- island girl with combat pants, Hiro -- Disco Dude with "I Luv Me" t-shirt, Pinky - transvestite? diva, Kitty-N -- Girl dressed up in a cat suit, Strike -- gangsta complete with guns, and the list goes on. There are 14 characters in all (10 originally selectable) 15 if you count the alternate outfitted robot at the end.

The 2-player mode is definitely where it's at with this game as one player becomes pretty repetitive. The bright visuals and silly animations as well as catchy tunes make this a fun game even for observers. As a result it's a pretty solid choice for a party setting. It's the sort of arcady fun that will be a pick up and play favorite for casual gamers but that will also appeal to the hardcore collector due to its quirky humor, offbeat music and Japan-centric content.
Review Page Hits: 1 today (132 total)
mediahook