Great ideas are not enough to save Curse of Darkness from mediocrity. Slightly recommended for Castlevania fans. 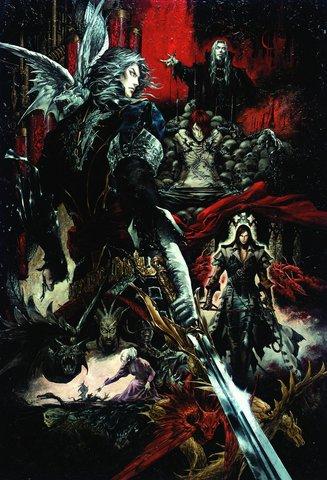 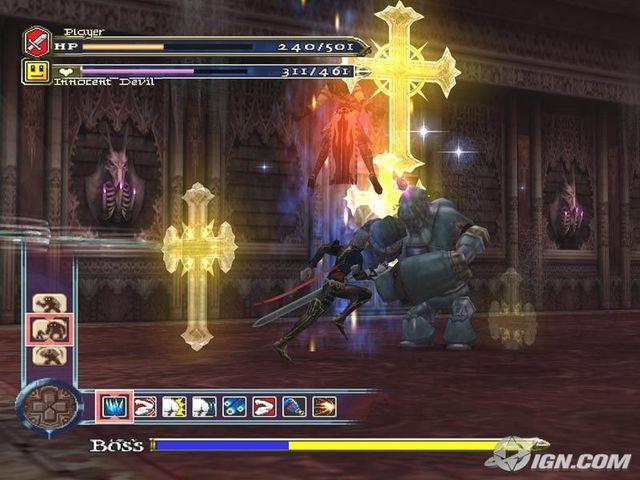 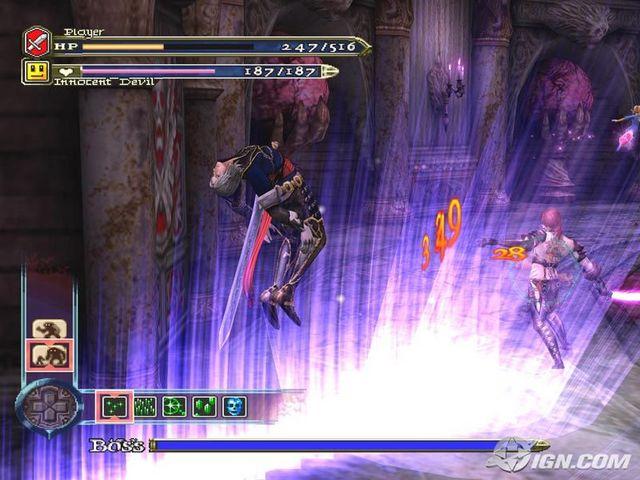 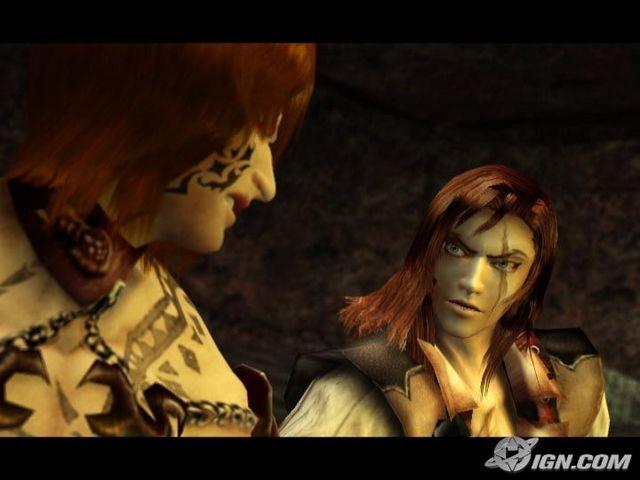 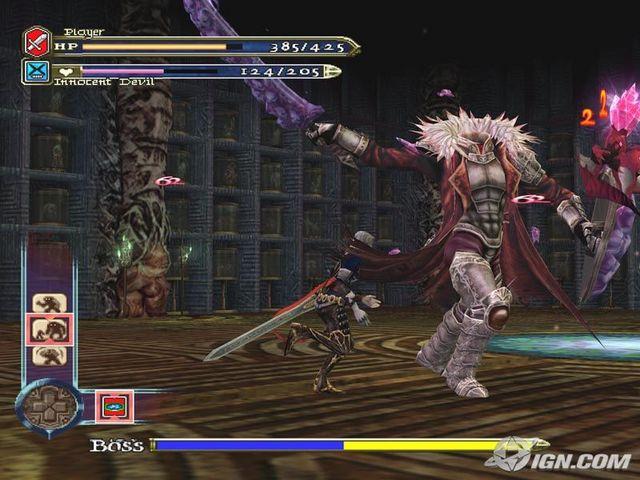 Curse of Darkness is a notable Castlevania title in that it continues the series' excellence in sound design and throws in some new, genuinely interesting and well-done gameplay elements to the fold. However, the same kind of attention given to the combat system and the soundtrack was not afforded to the graphics, creature designs or the overall gameplay package, and it leaves Castlevania: Curse of Darkness an ultimately mediocre and dull game.

*Gameplay*
Curse of Darkness has some ideas that shine brightly, but as a game it is ultimately crippled by blatant gameplay design flaws. The combat system is fun to monkey around with, even if it does involve beating up on the same kinds of enemies for close to 12 hours. I would describe it as being kind of God of War-like, since you alternate between X and O button presses to pull off various 4, 5, 6-hit combos. And it is a nice touch that the different weapon types (One-handed swords, rapiers, two-handed swords/axes, etc.) all have different attacks. It makes creating new weapons interesting, and is an incentive to keep playing. Leveling up the main character Hector isn't nearly as satisfying as leveling up in previous Castlevanias, because Hector doesn't gain any new abilities. No magic spells, no HP stealing. He just deals more damage and takes less of it.

Leveling up the new Innocent Devils, on the other hand, is pretty satisfying. You come across five different kinds of these "IDs" in the game, and they each can evolve into different forms, based upon the amount of white, blue, red, yellow, green, purple, or black crystals you collect from enemies. I had a silver-liquid golem, a fire dragon, a dark mage (who looked somewhat like Vivi from FF IX!), a little healing elf, and something else I can't remember at the moment. Unlike Hector, each of the Innocent Devils gain new combat abilities as they level up. The fire dragon got some pretty rad-looking fireball attacks later on, as well as carrying me over a gap I couldn't jump. The golem smashed down a wall to reveal a secret passage, and all the others had useful attacks for those pesky enemies that maybe did 5 damage. The Devils do make combat feel quite easy through most of the game, but they all become quite useful towards the end of the game.

The IDs were a nice creative spark and were the main reason I continued playing Curse of Darkness.

So, with a fast combat system and Innocent Devils, how does Curse of Darkness' gameplay go wrong? It is the incredibly not-thought-out level design that makes this game feel like a chore to play. The first three hours are enough to turn most gamers away. During that part of the game (and maddeningly at the end as well), there are entire corridors that do not contain enemies. This game is combat-driven, so how in the world can a combat-based game NOT have enemies in parts of it? On top of that, Hector runs PAINFULLY slow, and getting through the barren parts of the castle really does becomes a chore, feeling like it takes a lot longer to get where you are going than it actually does. The painfully slow speed of the main character is helped significantly when the roll maneuver is earned, and the enemies are definitely not as sparse as they are in the first and last sections. The beginning and final areas of the game really make for two boring book-ends to Curse of Darkness. During these boring parts, when there are no enemies and when the action gets monotonous and uninteresting, the lack of any platforming elements is painfully obvious.

Another thing that I really feel hurt the game was the decision to turn over weapons-making to the player. Yes, you get to make your own armor and weapons in this game, but it is just that: YOU have to make all your weapons and armor. What was so much fun about Symphony, Aria, Circle of the Moon, and Dawn of Sorrow was going into new areas knowing you were going to find some kind of useful weapon or piece of armor. Because of the weapon-making system, that exploration element is taken out of Curse of Darkness. You collect raw materials such as bronze, steel, "wild memory", etc., to make all of the weapons and armor. It sounds interesting, but it becomes a big chore towards the end of the game to have to turn back to early sections to find bronze to make a low-level weapon that is needed to make a higher-level weapon. The store in the game does allow you to just buy these materials, which helps a bit. But it still is still more of a burden than it was expected to be, that is beating up enemies for raw materials for weapons and armor.

So, what we're left with in the gameplay department is a fairly engaging action game with some bright ideas, but with some really poorly executed areas as well. The good-gameplay does not outweigh the boring parts, and they really drive the experience down to mediocrity.


*Graphics*
The graphics are passable. They don't really work to the game's detriment, because the frame-rate is rock-solid through 98% of the game. Some frame-rate stutters do show up towards the end though. But, they aren't awe-inspiring either, because there is always a mediocre draw-in distance, with fog always showing up until you arrive at the end of a corridor. Most of the levels are brown, and some of them look so similar that it feels like they run together. The Innocent Devil creatures all have nice designs, and their spells and abilities are occasionally good-looking, with bright red flames from the dragon's attacks, or lightning from the mage's.

The best thing about the graphics is the stable frame-rate, but the level designs do not have the artistic quality of even Lament of Innocence's levels, and are overall pretty drab. If the gameplay was better, the graphics would not be a hindrance, but they just accentuate the overall faulty design in key areas of the game. And what is up with Dracula's Castle being so bare in the end? Shouldn't there be tortured souls and what not roaming his castle? It is like someone died in there. Where's tha party at?! Dracula should definitely not renew the lease on THAT castle.

*Sound*
The sound in this game is impeccable. This game is worth checking out at a budget price solely for its sound. It will be worth checking out especially for Castlevania fans because it features one of the best soundtracks in the entire series. The first section's track, "Abandoned Castle" was enough to keep me playing through the painful first parts, if that says anything. It is a bit disappointing though that the game's best track comes at the very beginning. But the other tracks are varied and suit their locations pretty well. Also, the voice overs are unusually excellent, especially for the main character Hector.


*Replay*
The best replay value this game offers is going back to level up the Innocent Devils. It is also possible to make the Innocent Devils evolve differently, because of the new little ID shells your existing IDs drop during combat. So making different kinds of IDs is the best replay this game offers. Once the game is beaten the first time, two new modes are unlocked, the "hard" difficulty, and the chance to play as Trevor Belmont, the hero from Castlevania III: Dracula's Curse. Trevor plays just like Christopher Belmont from Lament of Innocence, so that means no leveling up this time either. Without the opportunity to gain new abilities, and with the lack of any platforming action, playing through Curse as Trevor seems like a pretty pointless endeavor.


*Learning Curve
Hit X X O, dive, X X O again, repeat until enemies are gone. The Innocent Devils, like was said before, make this a relative cakewalk through the bulk of the game, but they are handy in the end sections. The hard difficulty seems like a fair challenge, but why go through Curse a second time when you could instead be playing a GOOD game like Ratchet and Clank: Up Your Arsenal or Resident Evil 4?


*Overall*
My overall impression of Castlevania: Curse of Darkness is that of a game filled with SO much potential, yet in the end it comes up way short. Curse has some great ideas, and it even capitalizes on them at times, but more time should have been spent on creating an even gameplay experience. If the level designs were more interesting, platforming elements left in, and exploration a more integral part of the experience, this could have easily been recommendable. But unfortunately, Curse of Darkness isn't even as good as its predecessor. At least Lament of Innocence never felt like a chore to play. Castlevania: Curse of Darkness ends as a disappointment. It could have and should have been so much more.