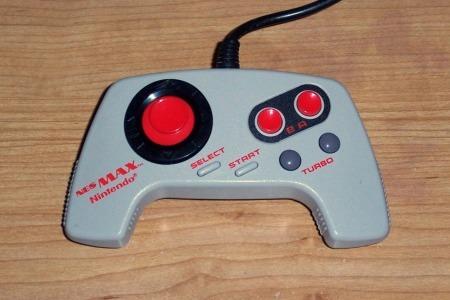 How this controller received Nintendo's 'Official Seal of Quality' is beyond my understanding. This controller is one of the worst I have ever played with. I'd rather use a Power Glove than an NES Max Controller. Instead of a normal D-Pad Nintendo decided to put a circle in it's place. This circle is supposed to be used instead of a D-Pad. The one main problem is that it doesn't always react quite in time and can start to hurt your hand after 30 minutes of play. When I first ever used this controller I happened to be on vacation. I had taken along with me 1 regular controller and 1 MAX controller, as well as a fake leather Nintendo carrying case full of games. Adventure Island wasn't as nearly fun playing with the NES Max Controller as it was with an regular controller. In fact, I didn't enjoy playing any game with that piece of poorly constructed crap.

Another major problem with this controller is the thickness and length of the handles. The controller has handles that weren't much thicker than a standard DVD case. This made it excruciatingly painful and hard to play with this controller. Nintendo must have not been thinking clearly when they released this controller to the public. This controller should have been contained in an air proof vault away from anyone's hands. Also, one last bad thing to mention about this controller are the Turbo buttons. They don't really do anything very noticeable. Thus making them irrelevant to the design.

Anyways, time to get to the good part of the controller.

Umm.....The A, B, Start, and Select buttons work properly.

Nothing very good to say about this controller at all.

Anyway, here's an analogy from the person I originally got my NES Max Controller from:

"Playing with this controller is like trying to eat waffles with a spoon. You can do it, but it's a pain in the ass, and why would you want to anyway?"
Review Page Hits: 0 today (782 total)
mediahook