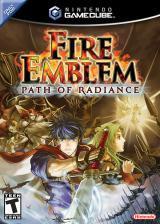 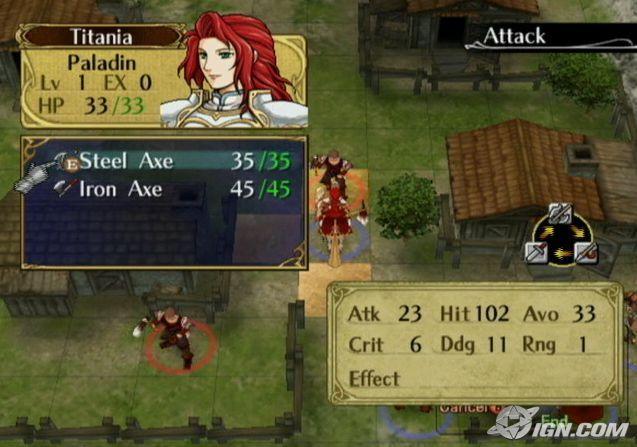 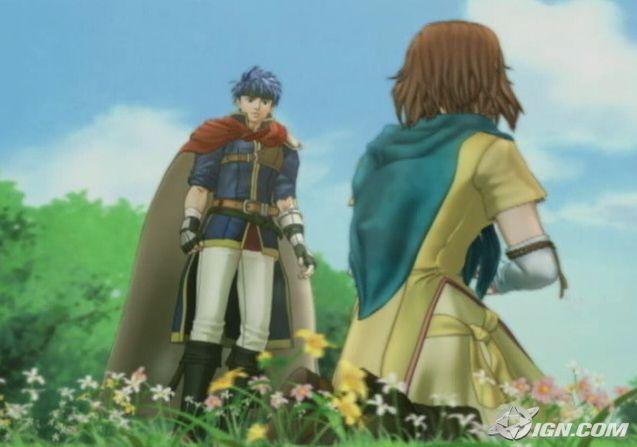 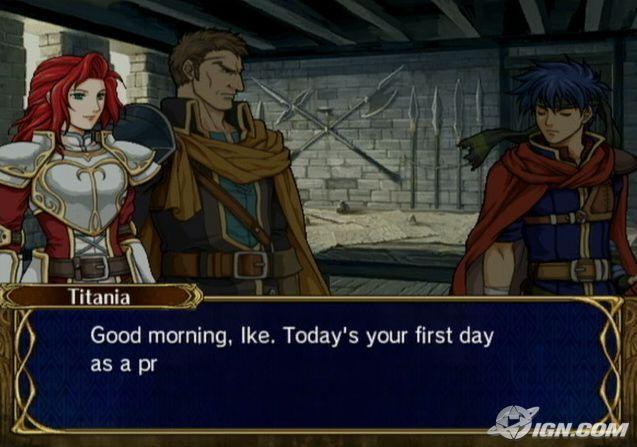 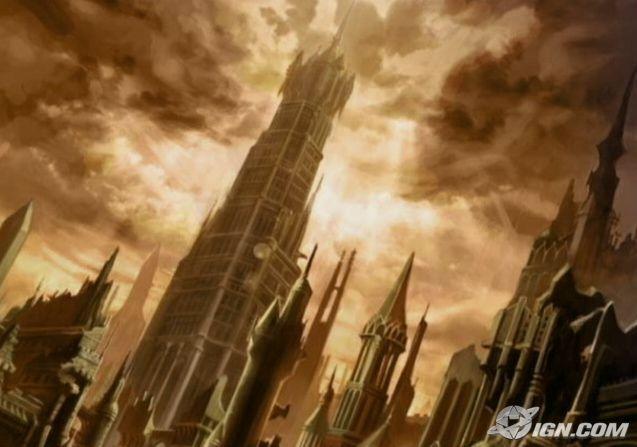 While looks count for a lot in today's gaming world, Fire Emblem: Path of Radiance is a rare, wonderful game that overcomes a bland presentation to deliver a memorable, solid, challenging and ultimately very rewarding gaming experience. The combination of a tough, slightly unforgiving (but not impossible) difficulty, appropriate music, spot-on writing and characterizations, and straight-forward-yet-deep tactical gameplay, Path of Radiance is a gem in the Gamecube's library.

Path of Radiance casts you in the role of Ike, son of the leader of the famous Greil Mercenaries. This band works from Crimea, a kingdom that shortly after your journey begins falls under siege from the neighboring kingdom of Daein, ruled by the Amish-beard-rocking King Ashnard. The Greil Mercenaries become involved in a desperate struggle to protect the last surviving member of Crimea's royal family, Elincia, whose birth was a long-kept secret. The initial inklings of the story are nothing new, but it soon centers on the mercenaries' mad-dash across kingdoms ruled by Laguz, half-animal, half-human shape-shifters, and by Beorc, humans who regard Laguz with animosity, contempt, and fear, in their increasingly desperate attempt to protect Elinica.

The game's story features a surprising amount of depth. What this game lacks in FMV (full motion video) to advance its story it more than makes up for with sharp writing. Each character has a distinct personality and the game features a mish-mash of different ones. From the traitorous Crow King Naesela to the honorable, astute Apostle of the kingdom of Begnion, Path of Radiance features characters that are fully-developed, have real emotions and who display a wide variety of them. Also, tensions between the Beorc and Laguz kingdoms are a big portion of the story. The Laguz and Beorc kingdoms and societies within the game feature an "ethnic" tension that is easily recognizable. Certain characters in the game have feelings towards the "other" group that us here in the "real world" often feel towards people of different colors, creeds, etc., but that we don't often notice. This aspect of the story is deft: it is played off incredibly well, is a natural extension of the game world and actually makes for a significant social commentary.

Commitment to each other within a "family" is another strong focal point of the story. The relationship between Ike, his father Greil, and Ike's sister Mist, becomes an especially touching centerpiece. The exchanges, jokes, squabbles, and "digs" between the game's varied characters all are engaging and pulled off naturally.

Enough with the story for now....

Before anyone gets scared off by the "unforgiving" difficulty, the "unforgiving" aspect of Path of Radiance's difficulty is a staple of the Fire Emblem series: once a character is killed in battle, he/she (most of the time) is gone forever. This is something not many games dare to employ, but in Path of Radiance it makes each decision in battle more immediate: it goes a long way in creating a strong bond between character and player. And it is not just for a character's ability in combat, but also for the development of the story. To see a character like Boyd, one of Ike's wise-cracking companions, die in combat and know that he is gone for the rest of the game actually feels like a loss. And not every game's story has that kind of attachment for the characters. I know EVERYONE cannot be killed off permanently, because characters who are essential to the story (Ike, his sister Mist, Elincia, etc.) are told to "withdraw" from battle.

But that is a preface, so here are the other main aspects of the game.


Graphics:
This is not a very pretty Gamecube game. The in-game graphics are quite bland and feature many washed-out looking textures. Some of the special effects for magic attacks are passable, but most of the character graphics (lizard and certain feline creatures excluded) lack a lot of detail.

The saving grace of Path of Radiance's graphical package is the combination of fine still-frame artwork, nice character portraits and the stylish FMVs. The characters all have their distinct looks, from the red-haired Paladin Titania to the Hawk King Tibarn. All of the Laguz characters (Yes, birds, felines, and dragons alike) are shown in their portraits in their human forms. The backgrounds for the game's areas, the "interpretations" if you want, are quite pretty. Elincia's three knights kneeling before her is a poignant image, as are the images of dragons beating against a ship at sea and castle towers being bombarded.

The full motion videos (all SIX of them) are really nice eye-candy. They are cell-shaded, but the way the shadows are hidden, each of them looks like a well-animated Saturday morning cartoon show in 3D! Each of them have great style, and are even beautiful at times, like when Mist and Ike are in the forest to confront The Black Knight, with the moonlight filling up the forest everywhere. Good stuff, and they're all worth watching.


Gameplay:
Ah yes, the gameplay! Fire Emblem's brand of tactical strategy revolves around a "triangle" system for weapons and magic. I didn't use magic-people all that much, so I can't remember what theirs was at the moment, but swords are good against axes, axes against spears, and spears against swords. I can say that magic attacks vs. magic is often ineffective, so keep that in mind. The biggest feature of the tactical gameplay is indeed the mortality of the characters. You rush headlong between five enemies packing swords, and if Boyd has an axe, chances are he is GONE....FOREVAH!

Important things for the Fire Emblem-non-initiated:

The highest level your characters can go is Level 20, just like those Bioware games. The characters level up every 100 points, but as you get stronger, enemies naturally give points based on their level relative to yours. The class system in this game works just fine but is not especially deep. All of the characters only upgrade to a new class one time, if that often. And these are strictly Beorc characters too, as Laguz characters do not class-up. I only found one item that automatically classed-up a character. So once they reach that Level 20 ceiling, they are stuck with their stats, unless other stat-building items are found.

After each mission is completed, players are taken to their menus where they equip their troops and divvy up experience points. "Bonus" experience points can be earned in battle and distributed to whichever character the player chooses. Weapons in the game have a limited number of uses. Whether an attack connects or not, the number of uses still goes down each time a weapon is selected for combat. Most characters can equip up to four different weapons at one time, so running out of weapon uses doesn't happen all that often on the battlefield. But it is important to restock characters in the menu screens after-battle at a regular interval.

This game has 29 missions. Each of them took me close to an hour to complete, and Chapters 17 and the final chapter took me over two hours each to complete. Each mission has its own objective: sometimes you have to "capture" a point on the map within a turn-limit, other times you might have to ward off an enemy attack for a certain amount of turns.

Also in the menu screens, Ike and his party carry-on "support" conversations with each other, determining which stats will level-up first. Sometimes your comrades can have a conversation after one battle together, other times it takes 5, 10, or even 15 battles together. And each character is limited to 5 conversations throughout the game. What these conversations do is influence how you will build your stats. Say Titania and Ike have a conversation: Ike and Titania will level up differently (say, HP, Defense, and Resiliency) than if Ike and Mist had a conversation (Magic, Hit, Offense). Yeah, I thought it was a bit unwieldy too, and it takes trial and error, and playing through the game a number of times, to realize who will level up with who.

Sound:
The sound in this game is not a full-blown orchestral score like you'll find in a lot of RPGs, but each musical selection is appropriate for the situations our heroes find themselves in. In some chapters, a suitably rumbling, bellowing chorus trumpets the overwhelming odds our heroes face. At other times, a lightly somber tune is used for when Elincia converses with her mercenary protectors.

Learning Curve
Yes, this game can be frustratingly difficult at times. I know I restarted my missions several times when one of my characters would fall in battle, just so I would have them to use later in the game. It's not impossible, but Path of Radiance is definitely a stiff challenge, and at times quite difficult.

Replay:
This game has AT LEAST two playthroughs written all over it. It took me over 30 hours the first time, so that's right around 60 hours of solid gameplay. And, depending on the number of times the game is played through, different characters are unlocked and accessible in the story mode. Even the dreaded King Ashnard is unlockable.....after FIFTEEN (15) playthroughs! Another good thing this game does is provide a REAL challenge for strategy fans in the way of the "hard mode." This mode absolutely smacks you upside the head with the number of enemies that have to be dealt with (40+ enemies on each map, compared to 12 of your characters). Plus, for perfectionists like myself, the already built-in incentive is to go back and gather all the characters you missed the first time, or that were killed by your dumb tactics.

Since this game has a lot of replay value, this is a safe bet at $50 new. This game is a steal if Nintendo ever budget-prices it, even at $30 new.


Overall:
This is a wonderful game. The characters are endearing because of slick writing and gameplay twists, and the story is enough to make you feel happy in the end. It does not have the class-building system of say, Final Fantasy Tactics, but it makes up for it with straight-forward, engaging gameplay what it might lack in overwhelming complexity. A simple game, told in a clear manner, but that is completely endearing and an instant classic.

It isn't perfect, but like Ogre Battle 64 before it, an excellent strategy RPG graces the Nintendo's console in its waning days. Three cheers for Nintendo, Intelligent Systems, and for Fire Emblem: Path of Radiance!

I hope Nintendo and Intelligent Systems make another one like this for the Cube.