An ageless wonder of a 2D arcade shooter. Do not pass up any chance to play Galactic Attack. 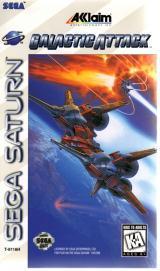 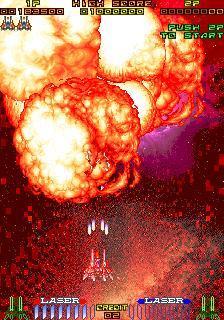 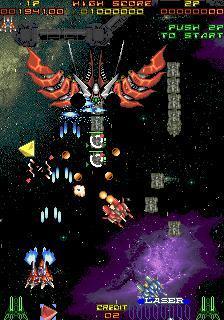 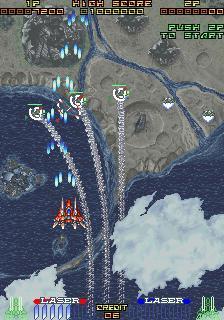 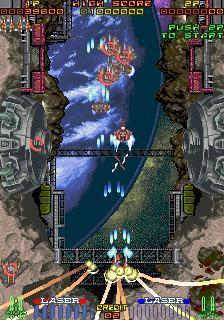 Galactic Attack is a fantastic 2D arcade shooter that, in my opinion, is reason enough to own a Sega Saturn. It is an experience that few games replicate or do much better.

While there have been no games released under the Layer Section name on any U.S. console (to my knowledge at least), Galactic Attack is in fact one game in that series. Developed by Taito and published by Acclaim, Galactic Attack is one of three games from that series that was released in America, the other two being PSOne titles Raystorm and RayCrisis: Series Termination.

Unlike the PSOne releases, which had 3D graphics, Galactic Attack is a 2D shooter that was fortunate enough to be released on hardware that could do 2D graphics justice. That means this game has a lot of action flying around on screen at one time while still running very smoothly. With enemy ships and bullets flying towards your ship, turrets firing from below at the same time, or a large ship sending turret fire and missle volleys at you all at once, Galactic Attack plays fast and runs even faster.

This is astonishing when you realize that Galactic Attack is a decade-old game. And that is not just where the graphics are concerned, but also with how well Galactic Attack plays 11 years after its release.

It plays pretty similar to the Raiden games in that there are no physical barriers for the player to contend with throughtout the majority of the game. One exception would be the first stage, where there are asteroids that you can actually shoot. Otherwise, the gameplay is solely focused on shooting enemies and acquiring power-ups. So 99 percent of the time you will not have to worry about getting caught between immovable objects, unlike in two more recent arcade shooters Ikaruga and Gradius V.

Galactic Attack is a special shooter for me, because once the game starts, not only are players shooting at enemies directly in front of them, but they are also shooting at enemies in the plain below their ship as well. There is a targeting reticle in front of the player's ship that is used to home-in on ships or other objects down below. You do not actually "shoot" these enemies/objects, but instead you are equipped with a very satisfying homing laser that is used to take them out.

Those expert developers at Taito not only made this mechanic work seamlessly but made it intuitive and never frustrating. Enemies are always placed "logically" so that their location feels natural to the game environment, not requiring any sort of awkward learning curve to make itself useful. Most of the ships that can be shot with the homing missle are easy to get a lock on, but of course the game offers incentive and consequence for players who try to blow up as many of these objects in the plain below as possible.

It is simply a brilliantly straight-forward mechanic that separates Galactic Attack from anything most gamers have ever played before.

I think it is what will keep Galactic Attack a fresh experience, because of how obscure integrating two plains in a 2D game really is. The only other game that I can say I have played that used this kind of "two-plains" mechanic even half as effectively was the fighting game Fatal Fury Special.

So the gameplay and graphics are both phenomenal, but what about the rest of the game? Unlike in a platforming game, the replay value of any shooter hinges on perfecting section after section of the game to gain as many points as possible. And Galactic Attack's gameplay hook makes it easy to come back and play it over and over again. It is probably the arcade shooter I spend most of my time playing right now. Its two-player mode is a great experience, even if there is so much action on screen sometimes that it can become difficult to tell what is going on.

This game also has great sound effects and music. The soundtrack is befitting of an anime-inspired space opera, with hollow, spacey synthetic sounds booping and beeping from the Saturn's music chip. The sound effects for the game's explosions, as well as the satisfying sound of the homing laser, really bring the experience to life and are well-rounded and incredibly solid.

With timelessly good-looking graphics, fantastically original gameplay and a solid presentation, Galactic Attack really fits my definition of a must-play game. It is an evergreen title that will remain as fresh an experience 10 years from now as it does today, with smooth-running 2D graphics and some of the most engaging arcade-shooting gameplay seen on any system, much less just the Sega Saturn. Somewhere between not too easy and a solid challenge, Galactic Attack adheres to arcade shooter genre conventions appropriately, while at the same time throwing its distinct wrinkle into the mix.

Galactic Attack is gaming's equivalent of a good wine. As shooters become less a part of the "modern" gaming climate than they already are, games like this one are going to be even more refreshing when gamers "discover" them for the first time in the future.


Sidenote
You can find more information about this game in the two links I have provided. Seek out this game and enjoy!
Review Page Hits: 3 today (996 total)
mediahook