One of the best PSN games. A must for 2-player co-op fans. 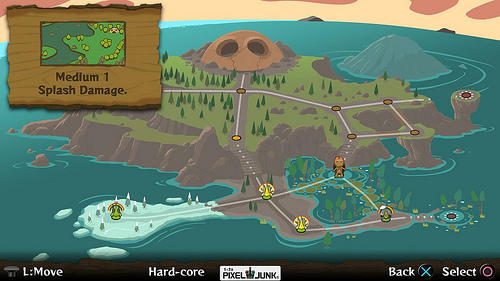 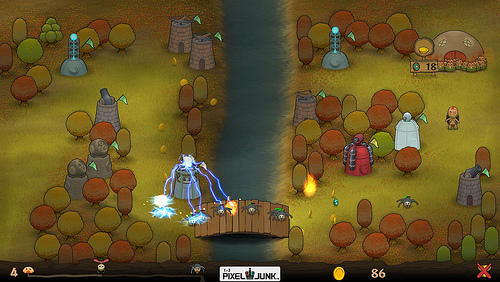 PixelJunk Monsters is a tower defense game. What that means is you have a somewhat geographically remote base that houses your citizens. Wave after wave of monsters will attack and you need to set up defenses to ensure the safety of your people. If everyone dies, you fail. If no one dies, you get a special treat.

The graphics are very basic but are clean and crisp and I find they suit the gameplay. Still someone who dislikes Nintendo style/ultra cute graphics will probably find the art design a bit of a turn off. On the other hand others will dig the non-traditional style, so your opinion of the graphics will probably just be a question of taste. It is a strictly 2-d game so there is no real issue of clipping or jaggies and collision detection isn't really a big deal either.

In Monsters, your defenses consist of different types of towers. Initially you basically use 2 types of towers - arrows for fast, weak opponents and cannons for strong, plodding baddies. Range, firing speed and strength vary from tower to tower and as time goes on you gain access to a variety of new tower types - fire, ice, anti-aircraft, etc. Most of these will be useful at some point as you tour your way through the various stages.

Your character vaguely resembles a turtle. You are responsible for wandering around, choosing where/what tower to build, and collecting coins and tokens from fallen foes (which disappear if not collected). The coins you collect allow you to build more towers. The tokens allow you to develop new types of towers OR to faster upgrade your existing towers. Your character can also "dance" on existing towers to upgrade their range or power. Towers do upgrade passively as well though based on hits and kills.

The game seems to be designed to play in 2-player mode and is much easier to manage in this way. Like Bubble Bobble, you can play one player but it is much more difficult and the pace much more frenetic. The object is to get through each level without losing all your "babies" (at least that's what we are calling them at my house). If you make it through a level it unlocks another branch of scenarios for you to progress to. If you complete the level without losing a single baby, you get a rainbow and a certain number of rainbows also will unlock additional levels.

The game really does bring back all the frustration and fun of yelling at each other while you run around like idiots picking up cash, building new towers and powering things up. Balance is very fragile and in the latter levels (and on the expansion) a lot of trial and error will be necessary in order to progress esp. if you need to rainbow a level. You will learn to place towers in strategic ways that minimize their range weaknesses and maximize their strengths. In single player mode the need to power up, build and collect coins often becomes really difficult.

I think both the game and the expansion make excellent additions to a game library. One word of caution - the effects are good but the music is a bit crazy-making. Several of the towers (notably the laser and anti-aircraft) have really cool sounding effects when they fire. Enemies roar/squeak when they die depending on their strength. Due to the need for trial and error/repeats the music can get annoying during a long session. Still the game is solid for anyone but exceptional for duos who want a good laidback co-op game. Furthermore it's safe for causal gamers with its simple, intuitive controls and nice learning curve.

This is a game you will want to play with your date AND your buddies. At $16 or less for the game AND expansion -- Pick it up.
Review Page Hits: 0 today (24 total)
mediahook