An underappreciated PSOne strategy role-playing game, with weapons galore and a memorable soundtrack. Might not be worth an exorbitant price, but it's definitely worth your attention. 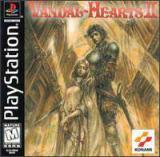 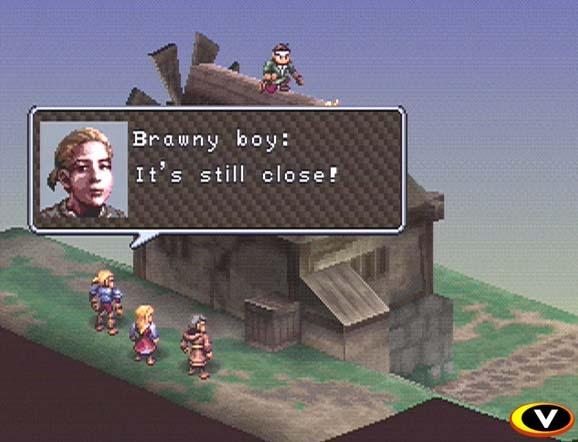 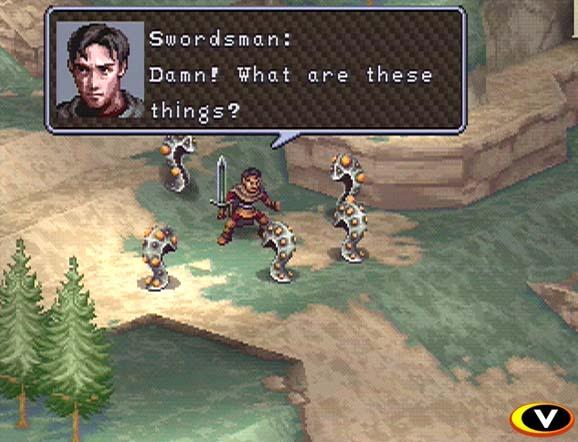 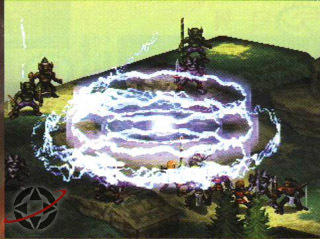 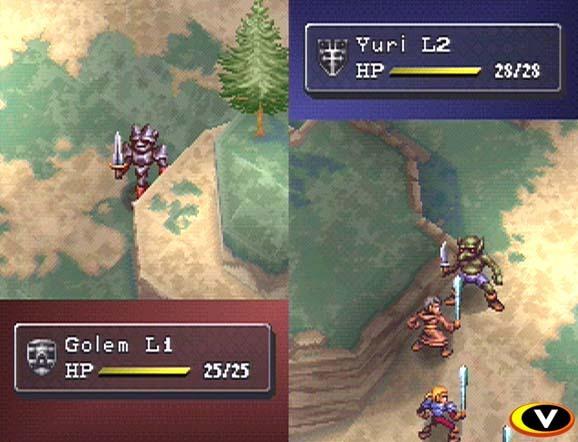 Vandal Hearts II is a worthy play-through for anyone who is a fan of Konami, strategy RPGs, and most definitely if you're a fan of both.

It starts off typically enough, in a small country town with the player's character being the son of the mayor. You get to play with three of your friends, the main love-interest Adele, your frail, robed friend Yuri, and your pony-tailed, stocky friend whose name currently eludes me. Anyway, through the course of the game, you see your character turn 19, his relationships with these friends alter in different ways, and gain several different companions along the way.

Even from humble beginnings, there's always a kingdom to save, and this game is no different. That's not always a good thing, but this game has that great musical score that Konami always cranks out for its games, and it plays differently from most other console strategy RPGs.

Gameplay
Yeah, this game shares the grid movement system from the other 1,200 RPGs on the market, but gameplay similarities end after that. First, both a player character and an enemy character move at the same time. When the player executes their decision to move, attack, etc., a random computer character moves at the same time, splitting the game screen in half. After about hour 15, the computer's patterns are fairly easy to exploit. They will typically go after the weakest character, or the one with the lowest HP. Exploiting the AI can become routine through most of the game, but the one interesting wrinkle is that the player character does not always act first. It's still wise to keep that injured player at a safe distance when needed.

Not only does the same-time movement keep the gameplay interesting, but also the level-up system. Your characters by themselves gain levels, but their strengths, weaknesses, and abilities are determined by their weapons and armor. Armor determines a character's movement, their HP, and what effects they are strong and weak against. There are 7 or 8 different weapon classes (knives, axes, one and two-handed swords, staffs, bows and arrows, and special weapons), and 4 or 5 armor classes (flying armor, magic-users robes, heavy armor, medium armor, etc.). There are also a number of single-handed shields used to up the player's HP stats.

All of the abilities (not just magic spells, but regular attack effects such as poison, holy, lightning, fire, etc) are unlocked by using the weapons in combat for a number of turns. The really cool thing about Vandal Hearts II's weapon system is the ability transfer: you can transfer your favorite abilities to new, better weapons you acquire over the course of the game. And you double up certain abilities too. The goblin shield has an ability that gains the character 15 HP after every turn. You can take two of these shields, unlock both abilities, and put that on a better shield for 30 HP every turn. Yes, I can't think of another strategy RPG that lets you do that, and it keeps Vandal Hearts II a fresh gameplay experience until the end.

Graphics
Personally, I have never minded the graphics in Vandal Hearts II. It is 2D character graphics on a 3D plane. In battle, you can pan in and out about three different levels, and you can completely rotate the field to see every nook and cranny on the map. The 3D battle engine does not destract from the experience at all. However, the infamous character portraits are so poorly drawn that they are worth a mention. They have a genuine creep-out factor to them, but I must say that Pratow (or whatever the guy's name is, with the white beard) has an UNCANNY resemblance to my dad when my dad grew a goatee.

Sound
I can appreciate a game more fully when it has a pleasant soundtrack, and Vandal Hearts II's soundtrack is a dandy. You're greeted with a rich, memorable menu track when you first start the game, and there are different battle themes depending on the significance of the battle. The game just has a rich, lush sound to it that stands out for a strategy RPG game. It is another great Konami soundtrack, and it enhances the game's enjoyment more than a soundtrack typically would. Not that this game would be handicapped without its sound, but all I'm saying is that it adds that extra special "something."

Learning Curve
Vandal Hearts II's progression is very linear. You can go back and play completed maps for extra experience and items, (you don't necessarily have to) but the next objective is clearly displayed on the over-world map with a big orange dot. Your little chess piece rumbles towards the objective when you select it, and you're typically greeted with a cut-scene before and, though not always, after battle.

Replay Value
The main quest in Vandal Hearts II took me 30 hours to complete. There are 6 different endings in the game, so there definitely is incentive to play through more than once. The endings are tied to decisions you made at a certain point in the game and whether or not you have obtained the materials to make the "Vandal Hearts" sword. There are 3 endings without possession of the Vandal Hearts sword, and 3 separate ones when you have obtained it.

A big aspect to the replay value of Vandal Hearts II to me are the weapons. I felt I had gotten a bunch of different weapons as I played through the game, only to realize I had barely gotten half of them. You have your ice axes, flame swords, lightning bows and arrows, dark staffs, ice knives, and a whole slew of "special" weapons, including a pinwheel (!), a mallet, a grenade, chakras and other stuff. These weapons and items, while not all useful in combat, are fun to collect and to find out what crazy abilities they have to unlock. They definitely help keep things interesting in every battle you're engaged. Weapons are usually found in chests strewn across the battlefield, and the "unlock" weapon ability is needed to open them. I usually had my flying armor character equipped with a knife so he could go around and collect as many chests as I wanted. They really add to the appeal of Vandal Hearts II, not just in the first play-through, but they add incentive to play through again and see what you missed.

Story
I guess an explanation of the story is in order. Simply put, I feel there's enough here to convince you to play it for 30 hours. While the story isn't a particular strength, it is involving enough so that you can care about what happens to the player and enemy characters over the course of the game. The main enemy is a Rasputin-like figure named Goddard who has his own cult that believes the time of St. Nirvath is over (or something like that) and that the world needs to be cleansed. Yeah, yeah, yeah. BUT, the main character's relationship with Adele is what kept me involved through most of the game. Also, the new characters have a fair amount of personality and have no trouble getting you to like them, especially Pike.

Overall, without giving too much away, there's a wrinkle between the main character and Adele, new alliances are formed, and an unexpected plot twist comes out of both a childhood friend AND the main enemy, Goddard. Reflecting on the story now that I have beaten the game, it was not perhaps Final Fantasy caliber (granted I have not BEATEN a FF game before) but it was definitely enjoyable, only had that one wrinkle that I didn't care for, tied up neatly in the end, and most importantly, was something that I feel I could go back to and enjoy all over again for a second play-through.

Overall
This game earns its stripes. While it doesn't necessarily have the "compelling" story, it has compelling gameplay. There isn't a single glaring flaw to the game, and it's a pretty meaty little adventure to boot. You'll probably clock in around 25-30 hours the first playthrough, and once you see that you did NOT get as many weapons as you thought you did, there's a good chance you'll look up an FAQ and prepare for a second go around.

This game is a personal favorite of mine, it's something that I take pride in enjoying, and while I haven't beaten the first VH, VH 2 has me looking forward to what Konami has cooking for the Nintendo DS.

I hope Konami expands this series for a wider audience someday, with a quality offering.